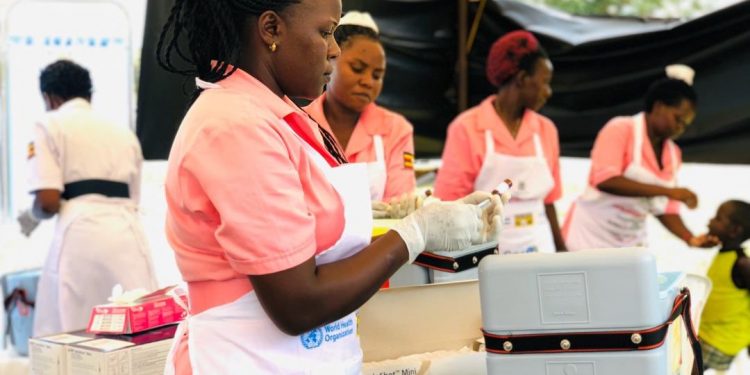 Today, the Ministry of Health has launched a mass immunisation campaign that looks to immunise more than 18 million children in Uganda against measles, polio and rubella.

Over the past three years, there has been an increased rate of measles outbreaks in several districts of the country. Polio also remains a threat in some sections of young children, hence the launch of the campaign to curb the above diseases.

The five day campaign targets all children under the age of 15 whether previously immunised or not, that are prone to contracting these diseases. The first three days will be conducted in schools and the last two in communities.

“This campaign does not replace the routine immunisation schedule. Parents, caregivers and all concerned must ensure that all children receive and complete all vaccines specified on our immunisation schedule after the campaign,” said Dr Jane Ruth Acheng, Minister of Health.

The ministry will use the campaign to sensitize the population on measles, polio, rubella and other diseases as well as investigate unreported but suspected cases of these diseases, an exercise referred to as extremely important.

This exercise is spearheaded by the health ministry with its partners GAVI, the Vaccine Alliance, United Nations Children’s Fund and the World Health Organisation (WHO).

Anita Fabiola to host African Entertainment Awards in the U.S this weekend, Eddy Kenzo among the performers