Museveni says Bobi Wine waged war on his own country, he cannot be allowed to enjoy its prosperity 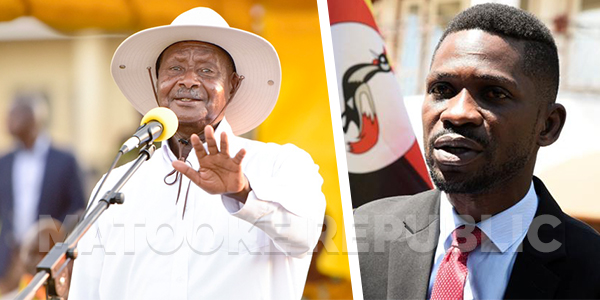 President Yoweri Museveni has finally spoken out on the reason for the continued blocking of Bobi Wine’s concerts. According to Museveni, Bobi Wine (himself) is the cause behind what is befalling him.

“Bobi Wine went to USA and told investors not to invest in Uganda. That means he is an enemy of progress in Uganda. I was in opposition myself in 1960s a member of Democratic Party and could not say don’t build Masaka-Kabale road because I was not in government. The road is not for government but the  people,” Museveni said while speaking in an interview with BBC at the Entebbe State House.

Museveni said such ‘bad PR’ about his own country makes him a bad leader since he does not mind about the development of the country.

Therefore, Museveni revealed that he cannot be allowed to enjoy the prosperity of the country he is blocking from developing.

Since being elected into a political office as the Kyadondo East Member of Parliament in 2017, several concerts of the People Power Movement presidential hopeful candidate have been cancelled with the last one being on this year’s independence celebration day. It was scheduled to happen at his One Love Beach Busabaala. However, police blocked it saying he did not meet all the required procedures.

The plan is out; Police vows to completely wipe out criminal gangs

The plan is out; Police vows to completely wipe out criminal gangs

Museveni says Bobi Wine waged war on his own country, he cannot be allowed to enjoy its prosperity