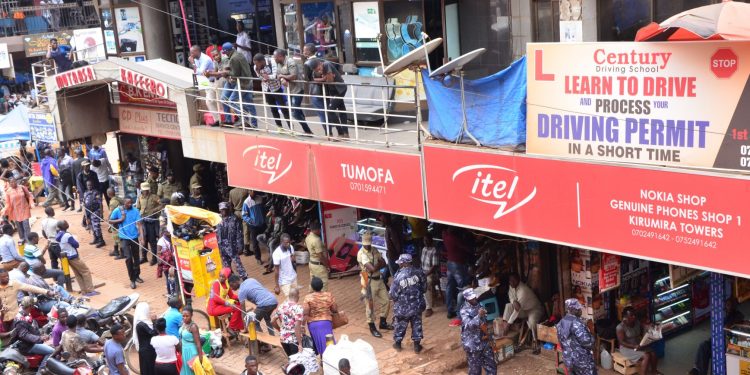 It is no public secret that police and other security agencies are on pressure to wipe out the ever escalating criminality especially in Kampala, yesterday afternoon a joint security task team conducted separate raids on shops and markets suspected to be dealing in stolen items within the City.

“In the last couple of months, there has been an upward trend of motorcycle thefts and robberies. We believe so many people’s lives were affected by the violent thefts. It is against this background that we tackled the problem by finding people who buy the stolen items,”Enanga said.

The first raid that started at 12pm was conducted around Muganzirwaza, where suspected stolen motorcycles, were allegedly being sold and stripped for spare parts. Police said the operation enabled them recover 134 and 250 suspects were arrested for further screening.

The other raids happened on shops dealing in suspected stolen electronic devices and phones, on cooper complex and Mutaasa Kafeero.

“An assortment of phones and electronic devices were recovered. The complaints are that dealers in these shops unblock and give devices new IMEI numbers making the stolen phones find their way back on the streets as legitimate phones,” said Enanga revealing that a total of 1600 mobile phones were again recovered.

He added, “All items recovered are clearly marked with the location and where the items were recovered from. We are inviting people to come to KMP headquarters, and crosscheck the electronic devices and phones recovered including laptops, cell phones, as well as tablets, computer monitors, TVs. Those following the suspected stolen motorcycles should proceed to CID headquarters in Kibuli with supporting documents.”

Police claimed that the massive operation will disrupt the supply line for stolen merchandise and are hopeful it will reduce the number of burglaries, street robberies, theft of motorcycles and related murders.

“We are going to continue our efforts to tackle thefts of all kinds and regularly raid shops dealing in suspected stolen merchandise. Meanwhile our community policing teams are also continuously working to ensure that safety messages on target hardening and increased vigilance are in place,” he said.