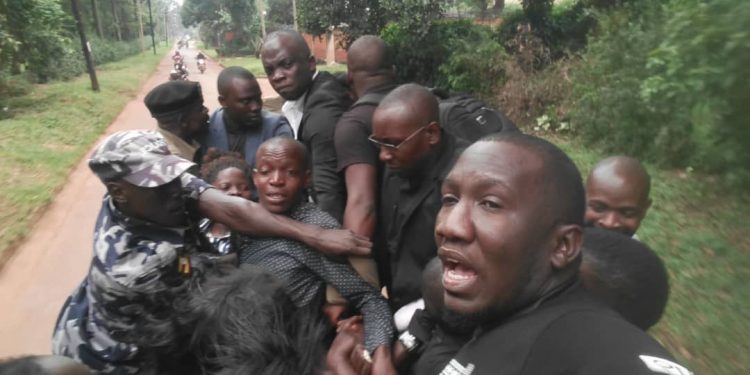 Over the past few years, journalists covering Police operations around the country have found themselves getting a fair dose of Police brutality by some Police officers who feel like their actions should not be recorded and reported.

The most recent of this kind of treatment came last week when journalists covering the happenings of Makerere University strikes were subjected to beatings, arrests and other forms of coercion.

Due to this, journalists under their umbrella body Uganda Journalists Association (UJA) decided to petition Inspector General of Police (IGP) Martin Okoth Ochola to voice out their dissatisfaction with the way they’re handled.

On their way to Police headquarters in Naguru this morning, the same Police arrested them, including their President Kazibwe Bashir. They were later released and driven to Naguru where they presented their petition with demands.

The demands include Police publicly parading and prosecuting officers that assauthed them as they were covering the inciudents at Makerere University last week.

Journalists also want Police to pass a directive to all Police officers to stop assaulting journalists and desist from hate campaigns against them. Other conditions include compensation to journalists that were brutalised in the line of their work and their equipment replaced as well as Police setting up a committee of human rights experts and lawyer to develop a working plan for Police to follow.

UJA feels that this will greatly help clean up the image of Police in the public.