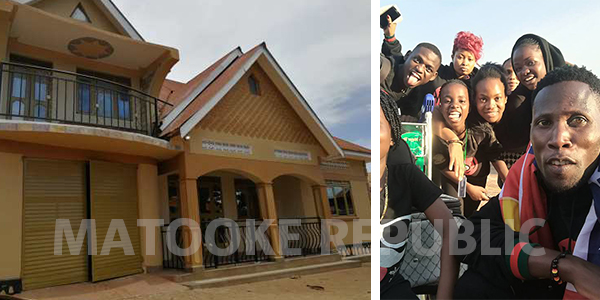 With barely a year since the Triplet Ghetto kids officially announced how they had purchased themselves a multi-million house in Makindye, sad news reaching our desk indicates that the renowned dance group is bound to vacate the premises.

While appearing on a local TV station, their manager Kavuma Dauda who looked puzzled revealed that their landlord has already issued them a notice of eviction for failure to meet the payment agreement.

According to Dauda, eviction will be happening very soon as he has totally failed to raise the balance.

“We are going to be evicted anytime because we have not yet paid the money. French promised us more money to complete the house but we spent most of it in renovations since the house was not fully furnished. Things haven’t been moving so well for us, because I have to pay their school fees, the medical bills. So we either have to sell the house and get our money that we put in or pay the owner’s balance,” Dauda said.

He disclosed how he has made further efforts of meeting government officials like the speaker of parliament, Hon. Rebecca Kadaga to help on the cause but no answer yet.

Singer Spice Diana, a known close friend to the group has today started a campaign to help the kids raise the money and avoid loosing their house.

“I am in so much pain now because of my babies triplets ghetto kids. Let’s save their house,” reads Spice’s post.