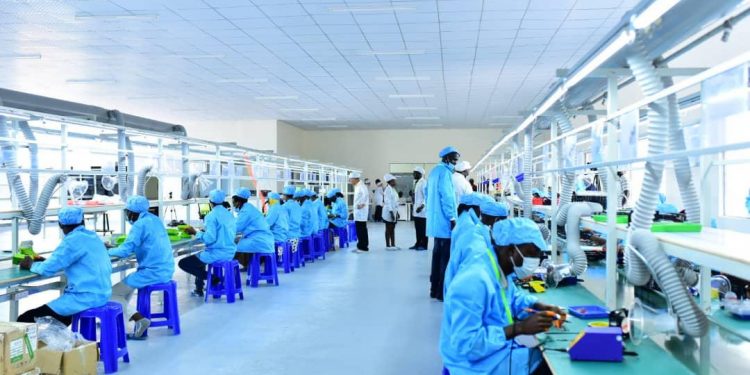 It has been tested and proven by the first world countries that industrialisation greatly drives the economy and country to higher levels of development, and that is why the government of Uganda has put a lot of effort in attracting investors that can set up industries here.

One such company is SIMI Technologies that government allowed to set up a mobile phone, computer and other accessories assembly plant in Namanve Industrial park.

President Yoweri Museveni has launched the plant today, and it will start operations as soon as possible.

The company has saidthat on a single day of full capacity, it will be able produce 1500 smart phones, 800 laptops, 2000 feature phones, 4000 USB cables and 4000 sets of earphones. Now that truly is some big volume, given the fact that it is the first ICT electronics assembly plant in Uganda.

The phone models that will be called “S300” will have a memory card slot, run JAVA, play MP3/4 files with dual-SIM capability powered by a 1400mAh capacity battery.

The plant looks to directly employ over 400 people that will facilitate its smooth running.

While speaking at the launch, President Museveni applauded China’s commitment to Uganda and Africa at large saying, “I am very happy with the Chinese solidarity with Uganda and Africa. Uganda is moving very well, the economy has grown to $35 billion using the normal method of calculating GDP,”

The President also said that with the availability of electricity, transport and ICT problems are going to be solved.