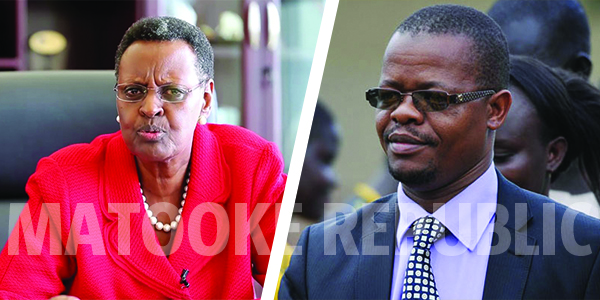 Magogo was given a two-month suspension and fine of 10000 Swiss Francs (about Shs37million) because he entered a plea of bargain with FIFA (he pleaded guilty of selling the tickets).

Magogo has been out of football for almost a month and half with his vice president Justus Mugisha taking charge as the interim president.

On Friday last week, another letter emerged but this time from the Minister of Education and Sports, Janet Museveni ordering the Inspector General of Government to investigate Magogo in line with the Ugandan laws and further take action if need be.

“FUFA as a quasi-public body, and registered under the Ugandan laws, is subject to the Laws of Uganda, this case can therefore also be prosecuted in Uganda under relevant laws related to corruption and embezzlement among others,” read part of Janet’s letter.

Government’s decision to intervene in Magogo’s case is good for a country that’s trying to fight corruption but to FIFA, it can be a bleach of its stipulated rules that govern all member federations.

In recent times, FIFA has strongly discouraged national governments from interfering in football matters and has always taken serious action against nations that defy its rules.

With the step Ugandan government is taking, aren’t we risking Uganda being banned from International football competitions?

What the rule says

FIFA, being an independent body does not accept the intervention of government in football-related matters. Member associations of FIFA are bound by the FIFA statutes which govern FIFA as an institution, the member associations, as well bodies under FIFA’s control.

FIFA, as an independent body frowns at government intervention, as stated in Article 17 of the FIFA statutes that: Each member [association] shall manage its affairs independently and with no influence from third parties.

The term “third parties” can be said to involve political interference in football, as well as intervention by national government in football affairs.

How is it a blunder?

However, in third-world countries like Uganda where government funds almost the entire FUFA budget, it is hard for FIFA to apply the law since the local body is hugely reliant on government.

Examples of countries that have been banned

In 2014, Nigeria was banned from all international football activities due to government intervention in its football federation when court ordered the Sports Minister to appoint a civil service member to run the Nigeria Football Federation (NFF).

In 2015, the Kuwait Football Association (KFA) was suspended with immediate effect due to the decision of the FIFA Executive Committee as regard the need for changes being made to the Sports law of Kuwait.

In 2017, Mali’s Football Association (FEMAFOOT) was suspended by FIFA due to government interference in football matters.

With the Minister’s directive to investigate FUFA president about a matter that has been already resolved by FIFA, Uganda risks getting banned, and this is not good for a country that looks to be progressing well in the different competitions we are currently involved in.

Rwomushana: People Power is only claiming to be raising the political change ‘dust’ but they have no plan that can overpower Museveni