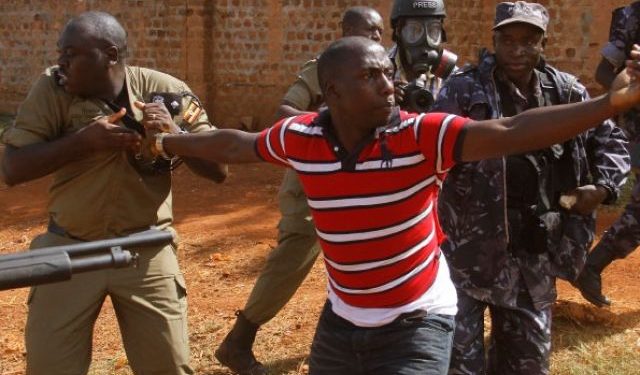 The former bodyguard to Amama Mbabazi, Christopher Aine, has been arrested together with his three colleagues for blocking traffic flow this afternoon on Kampala Road.

Aine and three others stormed Kampala Road with one holding a machete protesting for the lack of jobs in the country. Before officers from the Central Police Station (CPS) intercepted them, Aine blocked all cars on the road from moving as he shouted on top of his voice how he has failed to find a job.

He said government has remained reluctant on finding solutions to the alarming unemployment problem amongst the youths. Police arrested them and by press time the four were under detention at CPS.

In July in this year, Aine recorded a video where he gave President Museveni 15 days to fix the rampant corruption and other management weaknesses or else he was going to cause trouble.

In a video, Aine identified himself as the National Coordinator for “Rise for Peace Africa,” pressure group.

PHOTOS: How it all went down at Irene Ntale’s Unchained Concert