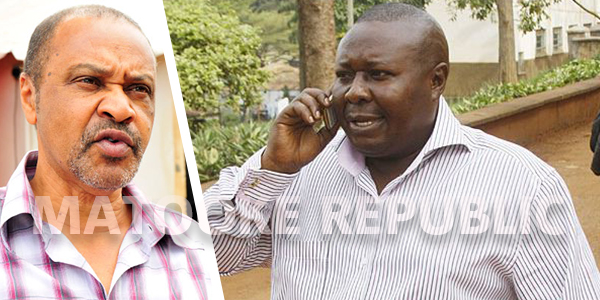 With the ongoing land wrangle between businessman Godfrey Kirumira and Mulago surgeon Dr Ben Khingi reaching an all time high where security personnel and casual workers beat up Kirumira on Sunday, Yasin Omar, the chairman of Muyenga where the dispute arose from has come out to clarify on what truly caused the exchange of jabs between the two camps.

Yasin says that Khingi proposed to renovate the road and widen it so that it becomes a two way traffic road but Kirumira has been blocking it for over two years now.

He adds that the Muyenga Local Council (LC) convened two meetings with Ministry of Lands, Khingi, Kirumira and the Police to find a lasting solution to the matter but Kirumira refused to show up on both occasions.

Yasin says that since Kirumira claims that the plans of the road will eat through his land, they requested the two parties to take their land titles to the LC so that government can survey the land and demarcate where the road will pass. Khingi obliged, and Kirumira turned a blind eye to their request.

“We want development in Muyenga. We don’t know why Kirumira refused to bring his land title, if he claims that this is indeed his land. Khingi has already brought his land title and we all have copies,” Yasin says.

He adds Kirumira is the one in wrong and that he is throwing tantrums over a small issue that can be solved by even a young child, only if he allows bringing the land title.

Yasin also decried Kirumira’s actions of throwing stones to the security and hurling insults to them, saying that those are actions of people that did not go to school.