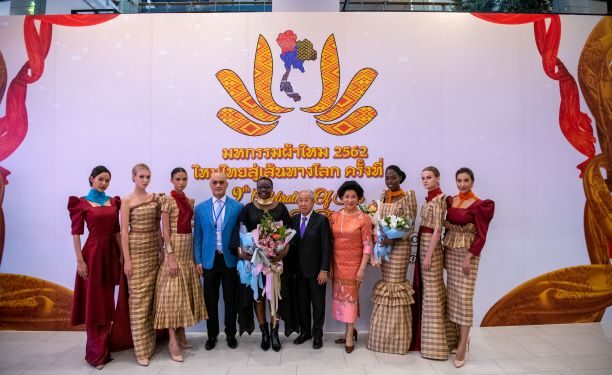 The Thai Tourist Assistance Foundation, in collaboration with members of the foreign diplomatic corps in Bangkok, organised the Celebration of Silk project to exhibit traditional and modern Thai silk and design.

For the last eight years the project been organized in honour of Her Majesty Queen Sirikit, the Queen Mother called “Celebration of Silk – Thai Silk Road to the World.” 2019 was the 9th annual celebration.

The celebrations were preceded by the hosting of the 2nd International Thai Silk Fashion Week, recognized as the biggest fashion event in Bangkok, Thailand, and it ran for five shows per day for five days from November 18 – 22 with more than 70 international and top Thai designers.

Her Majesty Queen Sirikit, the Queen Mother, is also known as the “Queen of Silk”. She has spent the last sixty years tirelessly promoting silk farming, silk production and the revitalization of traditional silk designs throughout the Kingdom of Thailand.

Through education and investment projects, she has made an enormous impact on the revival of Thai silk in Thailand, throughout Asia and around the world. She has also made important contributions to the lives and livelihoods of many Thai people.

ARAPAPA by Santa Anzo was selected as Santa’s outstanding performance in career,  business and leadership as a role model to youth and women.

“Our prime aim is to promote cross-cultural exchange between Thailand and participating countries through Silk diplomacy,” Edward explained.

By introducing international designers and unique designs during the week-long interaction, we gain new knowledge of the participating country’s tourism attractions. The design concept this year is “The Land of Smiles.”

The 2nd International Thai Silk Fashion Week provided designers the chance to represent their nation in a unique and special way. The experience included important commercial and media exposure for each designer and her country through video, live streaming and photography. Arapapa by Santa Anzo provided a 1-minute video showcasing Uganda’s tourism potential through fashion tourism.

The video featured the unique flora and fauna of Uganda epitomized by the source of the nile and the silverback gorillas, which kept her audience awed by the beauty of Uganda.

“I am because we are,” said Santa Anzo in Kampala, Uganda.

In her speech, Santa emphasized that fashion has the capacity to lead the industrialization of Uganda and Africa at large as it is the second biggest employer of women and youth in Sub- Saharan Africa. Fashion is trade through garment production and sales and as well as tourism, fashion drives the necessary media buzz.

The project run for an entire week with design seminars, university lectures, commercial displays and an extraordinary nationally televised fashion shows each year.

According to the event handbook to be distributed in all 78 countries, some of the countries that participated are the Netherlands, Russia, Belgium, Isreal, France, Uganda, Morocco, Egypt, Russia, Los Angeles, China, South Africa, New Zealand, Peru, Chile, Spain, Nigeria, india, Turkey among others.

Anyone trying to take us back to war shall be stopped by all means, you need us a bit longer-gov’t Spokesperson Shaban Bantaliza

Anyone trying to take us back to war shall be stopped by all means, you need us a bit longer-gov’t Spokesperson Shaban Bantaliza