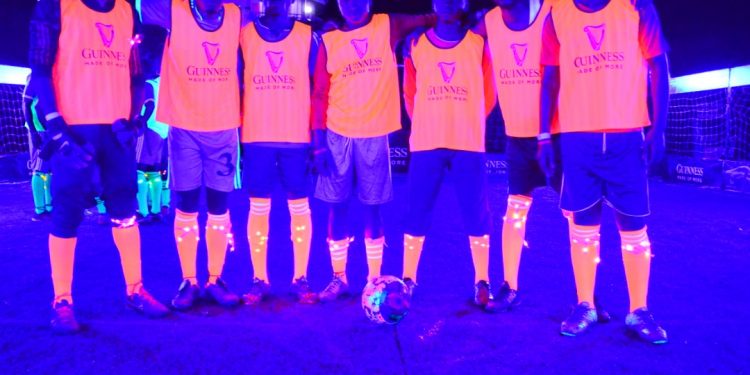 One of the Guinness Night Football teams.

After two months of intense footballing action in three major towns, Kampala, Fort Portal and Mbale, the competitive Guinness Night Football series will be coming to an end on Saturday.

The weekend action is expected to be nothing less than fireworks as it will be the weighing scale of who goes to Nigeria for the Pan-African Extravaganza.

After three outings across the country (central, eastern and western regions), twelve teams qualified for the grand finale that will be held at UMA Exhibition hall in Kampala.

From Mbale, El Tangia and Super 7 qualified in the 5-aside and human foosball respectively, Team Abasasi and UPU students  topped Fort Portal while  Kampala has the highest number of teams (eight) in the finals and these include; Naguru United, C Club, Jabulani, Sona, Sound Boyz, Team 13,Socceroos and winners FC.

Only one winner will walk away with a yet-to-be revealed prize on top of the football extravaganza that is set to take place in a yet-to-be disclosed country.

Others teams and fans will also leave the premises with lots of goodies courtesy of Guinness since December is a month of merrymaking.