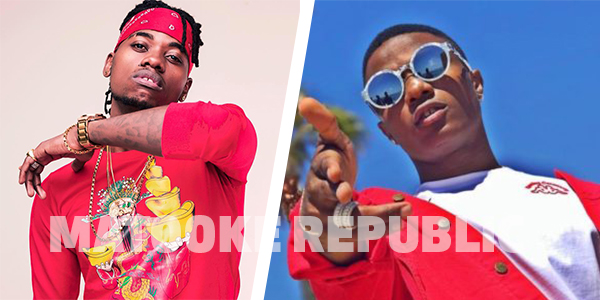 It is time to believe rapper BigTril’s claims that Parte after Parte is not only a smash hit, but also an anthem as the jam is only continuing to soar higher and higher.

The fresh blessing that has come with the song indicates that Nigerian star Wizkid who arrived in Uganda today morning is hunting for Striker Entertainment rapper BigTril to do a remix of his Parte after Parte song.

Wizkid’s official Deejay, DJ Tunez who stepped foot in Uganda on Tuesday yesterday posted on his official twitter handle saying; “We are looking for BigTril.”

Parte after Parte has been on fire in Nigeria as it managed to make it to the Top 10 on the Nigerian Apple top 100 Chart, peaking at number two.

Three weeks ago, Wizkid endorsed the jam by tweeting it and BigTril couldn’t hide his excitement and immediately retweeted saying; “WTF? Wait what? …. Wizkid f** with the vibe someone hold me right now!”

Wizkid will today be performing at Lugogo Cricket Oval and BigTril is also on the lineup of Ugandan artistes set to perform at the event.

As we speak now, Parte after Parte Is holding the number one spot at the BBC Radio 1Xtra’s Top 5 chart.