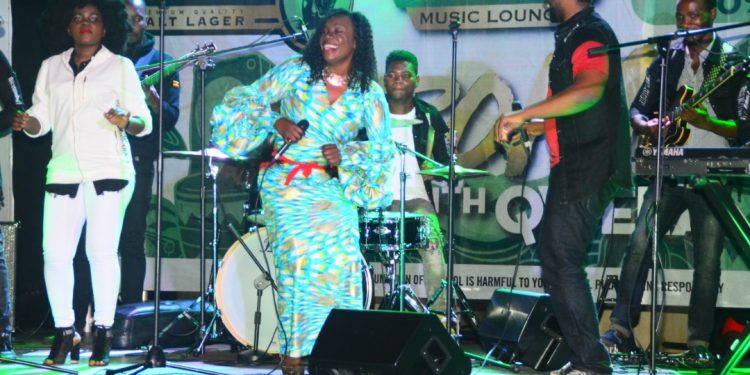 December’s Afro-mix grand finale night with Qwela on Friday night was one show that did not disappoint music lovers as the live band performers proved that they are indeed the best in the business with a fiery entertaining performance all evening at the Bight of Benin Restaurant in Nakasero.

The evening was masked in 100% rhythms and sweet melodies right from the beginning as Qwela kicked off with a delicate story-telling session through songs. This seemed to steal the attention of the audience with many drawn to the tales being sung in rhythmic melody.

Masha David, the lead vocalist later wowed the crowd with a passionate solo performance blended with flavours of Ugandan folk sound reminding the crowd of the timeless songs they have always listened to.

The highlight of the night came in from guest artist, Afrigo’s Rachael Magoola, one of Uganda’s most prolific Afro-folk entertainers who put up a great show leaving the crowd in a cheery mood and wishing the night wasn’t coming to a close.

“Tonight, we invited Rachael Magoola for an epic end of year music special. It has been an amazing experience playing by her side and bringing joy to our guests,” said Masha David after the show.

The Tusker Malt-sponsored event has been a monthly music getaway for lovers of quality music played in a live band setting. It has nurtured an appreciation for music from both within the country and around the continent all year long with the band weaving in their own unique sound derived from the fusion of each of the band members’ different cultural backgrounds.

“Throughout the year, the Tusker Malt Music Lounge has traversed the country bringing music lovers and consumers live quality Afro-based music performances and tonight, we were glad to be a part of the grand finale with Racheal Magoola behind the mic, she is a true Ugandan marvel,” said Cathy Twesigye, Tusker Malt Brand Rep, UBL.

Qwela is a lively seven-piece Afro-fusion band. They have previously featured Lillian Mbabazi, Tanga and Tempra Omona since joining the Music Lounge under their ‘series’ this year.