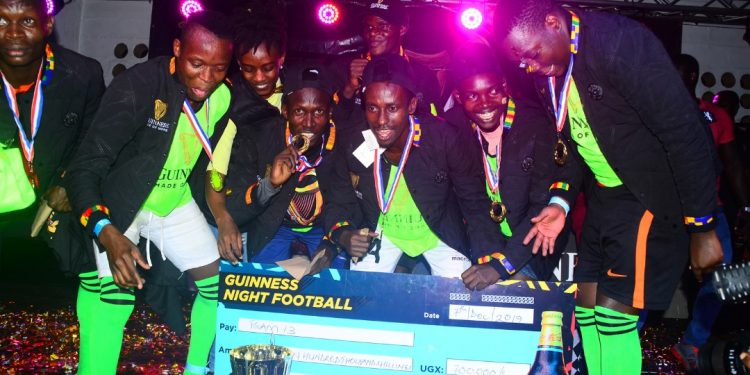 After weeks of fun footballing action, the Guinness Night Football series came to a stunning end last night at the UMA Exhibition Hall in Lugogo.

The action-packed night was a battle of supremacy as a total of fourteen teams from three regions took to the pitch for a chance to win the championship.

The night featured games like human foosball and 5-Aside football among others.

Teams like El Tangia and Super 7 that qualified from the eastern town of Mbale were put to the test by teams from the western town of Fort Portal who were well-represented by UPU students battling Team 13 in an epic penalty shootout that saw Team 13 come out victors and the overall winner of the series with a narrow 2-1 victory.

Team Super 7 were the winners of the Guinness Human Foosball 2019 that saw their teammate Kassa Ahmad win himself a fully expense paid trip to Lagos Nigeria where he will get the chance to play in the Guinness 5-Aside Pan African football extravaganza and get a chance to rub shoulders with Manchester legend Rio Ferdinand.

Speaking to journalists during the event, UBL’s Cathy Twesigye couldn’t hide how excited she was at how the series had turned out.

“I cannot tell you how overjoyed I am at the moment. I believe that no one understands football like we do because at Guinness we understand the nation’s passion for the beautiful game. We are always looking for ways to celebrate and unite the passionate football fans. This has been an amazing experience. Our consumers came out and showed the whole world that they are truly Made Of More!,” said Twesigye.

Team 13 walked away with a cash prize of Shs700,000 with the best player, New Vision’s Solomon Muleyi winning himself a fully expense paid trip to Nigeria to meet Ferdinand as well, in a Pan–African football extravaganza slated to take place later this month.

The night climaxed with performances from Uganda’s very own Cindy and man of the moment BigTril who together with DJ Ciza threw a riveting performance hyping up the merrymaking.