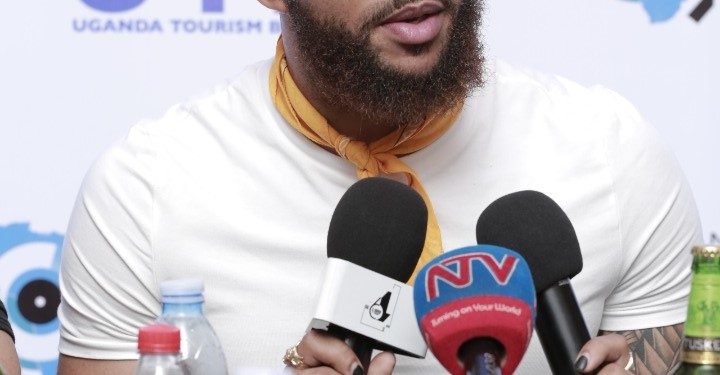 American rapper and singer, Jidenna is without a doubt one of those stylish fashion forward artists you don’t get to see every day. The flashy and fine-looking bearded stud who is scheduled to perform at two of Uganda’s biggest shows will be the star attraction for show-goers this weekend.

The Classic Man is set to perform at the seventh edition of the Ciroc-sponsored Abryanz Style and Fashion Awards (ASFAs) and Tusker Malt’s Blankets and Wine that will take place sequentially on Friday December 13 and December 15.

While addressing the media during a press conference held at Serena Hotel Kigo on Monday evening, Jidenna promised fans an electrifying show.

“I am very happy to be in this beautiful country, I will be having two shows and I can’t wait to have fun with you guys,” Jidenna said.

Jidenna, known for his fashion sense will be rocking British fashion icon Ozwald Boateng’s designs to the red carpet before entertaining the guests at “The Stars” themed ASFAs event on Friday at Kampala Serena Hotel.

“Ciroc is known to grace the lips of the hottest celebrities in the world’s most iconic celebrations like ASFAs. It is the drink of the stars that choose to celebrate in signature style and what better way to celebrate a star-themed ASFAs than with a world-renowned artiste like Jidenna whose stardom has taken the African fashion industry beyond borders,” said Annette Nakiyaga, Head of the Luxury Portfolio, UBL.

Away from the fashion world, the Classic Man has also been on tour ever since the release of his second studio album “85 to Africa” on August 23, 2019.

Having recently completed his American tour, the music sensation is now touring African cities. 85 to Africa follows the release of his debut album The Chief, EP and Boomerang under Wondaland Records and Epic Records. The new album has a feel of his African roots heritage from Nigeria, something his Ugandan fans go wild over.

“Jidenna is an artist with unique sound who blends his music with his African roots. He is the perfect choice for our Afro-Fusion music stage that is Blankets and Wine. There is no better way to crown our 2019 Tusker Music Lounge shows than with Jidenna,” Tusker Malt Lager’s Brand Manager, Catherine Twesigye said.