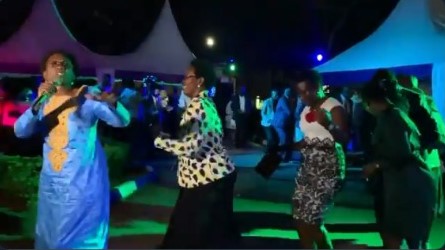 The festive season is upon us and different companies, government departments and individuals alike have already started holding end of year parties to celebrate all they have achieved this year, award the best performers or whatever other reason they have.

The same kind of party was held last night by Ministry of Health at their headquarters on Lourdel Road in Nakasero.

The party that kicked off with speeches from different officials including the Minister of Health Dr Jane Ruth Acheng was going well until the time to get on the dance floor.

According to a source, the Minister invited everyone to join her on the dance floor to shake off all the year’s stress and celebrate the Ministry’s achievements, and everyone did as asked, or so they thought.

Unfortunately, as the dance was going on, a yet-to-be identified individual stole the Smartphone of Director General Health Services Dr Henry Mwebesa. Mwebesa came back to his table where he had left the phone and it was nowhere to be seen.

The Minister was alerted and she swiftly ordered for the entire Ministry premises to be sealed off allowing nobody to get out, unless thoroughly searched in an effort to recover the phone.

The party went from enjoyment to a search and find scene as the search went on almost throughout the entire night. Unfortunately, by press time the phone had not yet been found.

A source intimated to Matooke Republic that currently there is a lot of bad blood in the Health Ministry and that some officials don’t see eye to eye so this may have led to the stealing of the Director General’s Smartphone as it is believed it stores a whole lot of information some of which might be secret.