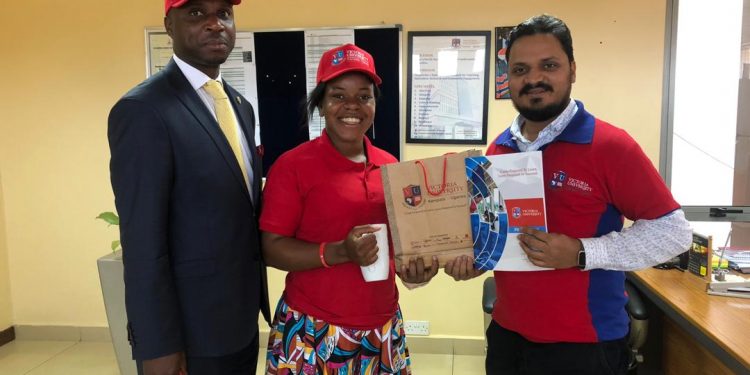 Last year, the story of a one Sharon Mbabazi, a University student from Muteesa I University who ventured into bricklaying to pay her university tuition fees and fund her campus life made headlines.

On Saturday last week, Mbabazi graduated with a Bachelors’ Degree in Mass Communication and Journalism from the same University and the news of her graduation was met with much enthusiasm from the public as everyone was congratulating her for her perseverance and all effort she put in. She was particularly on Cloud 9.

Towards the end of last week, Mbabazi received great news as she was offered a partial scholarship by Victoria University Vice Chancellor Associate Prof Krishna N. Sharma to pursue a Masters Degree in Public Administration and Management in the March intake.

On Thursday last week Uganda Cranes continued to cement their place as the best footballing nation in East Africa after beating Eritrea 3-0 in the final of the CECAFA Senior Challenge Cup that was hosted by Uganda.

Parliament unanimously disagrees to give out Murchison falls

Earlier this month, Cabinet approved a feasibility study to be done in Murchison Falls National Park along Uhuru Falls, to determine the impact of a proposed Hydro-power dam constructed on the falls will have on the environment and the general eco-system of the conserved area.

The decision and the proposal from its inception has always received backlash from the general public but the government has always hidden their intentions in the guise of having the country generate more electricity that will be used to drive the mushrooming industries.

Newly appointed Justice Minister Ephraim Kamuntu said that the feasibility study for the proposed dam will be done on Uhuru Falls, a seasonal kind of falls. This revelation prompted Speaker of the house Rebecca Kadaga to wonder how government can construct a project that needs constant supply of water on seasonal falls!

What followed was Parliament to unanimously disagree with the proposal. Kadaga has now referred the matter to the Committee on Natural resources for further scrutiny, and they report back to Parliament.

It should be noted the Murchison Falls National Park, the place where this dam is proposed to be constructed is the most visited park in Uganda by tourists who enjoy, among other attractions, the Falls that fall from a height of 42 meters.

Bunyole West County MP James Waluswaka revealed to parliament  how he has learnt of mismanagement of funds and the bureaucracy at the Uganda Police Exodus Cooperative Saving and Credit Society Ltd ( SACCO).  He said that the books of accounts for the SACCO are also missing.

This prompted Minister for Microfinance Haruna Kyeyune to tell Parliament that it is now very necessary for the registrar of cooperatives to intervene and audit the Police SACCO.

“The Inspector General of Police cannot run the SACCO. It is the shareholders who do,” Kyeyune said.

The junior officers claimed that their money has always been swindled by top Police boss who are not even members of the SACCO.

Exodus Sacco is worth more than Shs20 billion and has over 30000 members of which the majority are of lower ranks from Police Constable to Inspector of Police.

UK based rapper MS Banks spices up Guvnor’s Snap Off