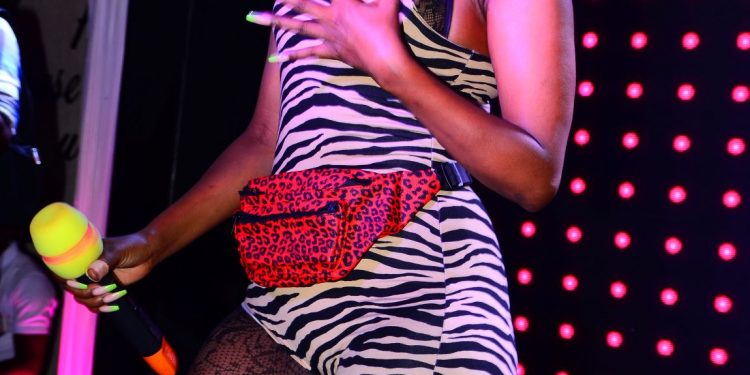 As the Kampala Night owls sober up after the New year’s Eve , many flocked city uptown bar Sky Lounge to usher in the new year with swag mama Sheeba Karungi as she premiered her video Ekyama.

Known for her hardwork and resilience in the competitive music industry, Sheebah has earned herself a spot on the table of the men and the Sheebaholics came out in big numbers to celebrate her milestones in a night that they dubbed Sheebaholics End of Year Party.

From the stairs to the interior of Sky Lounge, the sheebaholics kept waving Sheebaholics flyers as they popped and sipped  Ciroc, the official sponsors of the event.

As the clock struck midnight, fireworks was displayed while musicians like fresh Bwoy Fik Fameica, Daddy Andre, Kabako, Diamond Oscar and Topic Kasente gracefully warmed the stage with electrifying performances before the main act who the fans kept demanding for.

Clad in a brown one leg animal print, amidst loud screams from the crowd Sheebah took her fans down the memory lane with hit after hit. However the highlight of the night was when Sheebah thanked all her fans for giving her a reason to smile.

Sheebah also gave some of her fans the true value for money and a night to remember when she gave them a chance to wine with her as she performed.

I can assure you I will come back to Uganda and perform, this is my motherland – Yvonne Chaka Chaka vows

Ladies, how much is your boyfriend worth? Woman sells cheating husband for Shs60K, buys New Year clothes

Ladies, how much is your boyfriend worth? Woman sells cheating husband for Shs60K, buys New Year clothes