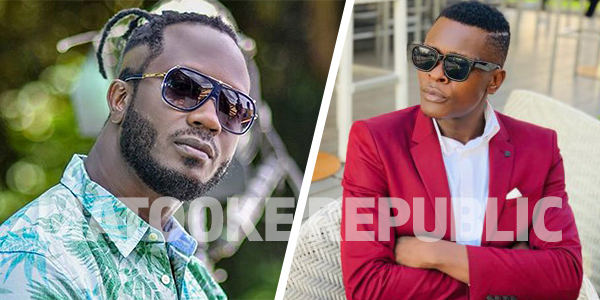 From Bobi Wine to now Jose Chameleone, Bebe Cool has resurrected his old lifestyle of hitting on his generational rivals in the music industry.  Bebe’s rant however on the self-proclaimed music doctor is not about his music career but rather his ever swinging political stand.

Last year, Chameleone announced how he was going to contest for the Kampala Lord Mayor seat in the 2021 general elections. A month later he was unveiled as a Democratic Party (DP) member.

However, since then the singer has been seen rotationally donning DP and People Power signature attires.

And over the weekend during the New Year celebrations at Enkuuka that happened at Lubiri Mengo, Chameleone came donned in a red beret and red t-shirt that had an image of Bobi Wine, the leader of the People Power Movement.

When Bebe Cool was asked to comment on Jose Chameleone’s choice of dress code, the renowned Silent Majority fanatic adamantly alleged that Jose is not man enough to make a bold stand on his political theories.

“Chameleone is a good reptile who has managed to change colour depending on situations. Men don’t play those cheap games. They stick to their ideas,” Bebe said.

Bebe and Chameleone once worked together for NRM during the 2016 general elections. The duo was part of the famous Tubonga Nawe project.

Chameleone this year denounced to have not been a member of NRM saying he only joined them for business in a capacity of a musician.