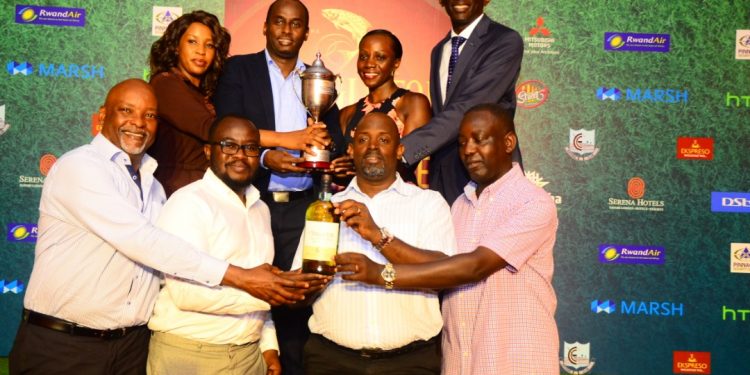 The Singleton Match Play Challenge, undoubtedly one of the most sought-after experiences on Uganda’s golf calendar is back for Season 4. The announcement was made during a press launch that took place today at the Kampala Serena Hotel.

The series that teed off in 2017 returns for its fourth season starting with a qualification round this Saturday, January 11, at Entebbe Golf Club. The championship that is played in a four-ball better ball match play format will run over a period of seven months.

Famed for the most outstanding 19th hole experience you will find anywhere in Uganda, the tournament has attracted more than 100 of the finest golfers in the country in each of its last three editions as the competing pairs went head to head on the gruelling course until mid-July of every year in pursuit of the ultimate prize.

Speaking to journalists at the press conference, Edwin Tumusiime the Captain Entebbe Club addressed the media on the format of play during the match play championship and how it is key to take part in the ever growing series

“We take the Top 60 pairs, the other pair is the defending champions that automatically qualify while the other three pairs are chosen by the sponsors and put through a draw so as to play. For one to qualify to play in the championship, players should be fully paid members of from their respective clubs,” Edwin Tumusiime said.

With The Singleton as its headline sponsor, the challenge has been a runaway success, and has attracted partners who include CBA Bank, DStv, Serena Hotels, Pinnacle Security, RwandAir, Mitsubishi Motors and Street Club. This year, MARSH, a global leader in insurance brokerage and risk management joins this prestigious list.

Still up for grabs this season is the prize of a brand new Pajero Sport courtesy of Victoria Motors, which awaits any golfer who manages a hole in one.

“The Singleton Challenge has through the years cemented its reputation as the place where we craft first impressions to create lasting ones.  Uganda’s best golfing adventure and most remarkable 19th hole experience is back and everyone that loves this game should be excited,” said Annette Nakiyaga, Head of Luxury Portfolio at Uganda Breweries Limited.

Shs700 million has been set aside for the golf series that has attracted 100 golfers that will be playing in the match play championship starting this weekend.

The winning pair this year can look forward to a fully-paid trip to watch the OMEGA Dubai Desert Classic, a series which has welcomed some of the best golfers in the world like Tiger Woods and Henrik Stenson.

The subsequent rounds will be played as scheduled:

Note: in the Professionals category, the winner will walk away with the grand price of Shs15 million.