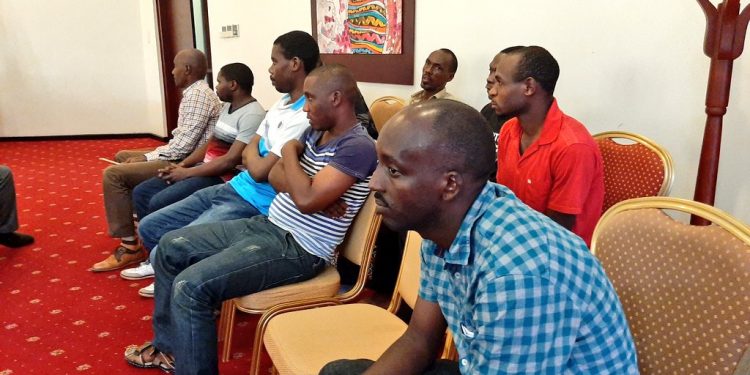 The nine Rwandan nationals whose charges have been dropped by he Court Martial.

Yesterday, the General Court Martial in Makindye dropped all charges they had against nine Rwandan nationals.

These nine Rwandans who have been facing charges of illegal possession of firearms are now as free as a bird namely; Rene Rutagungira, Bahati Mugenga, Emmanuel Rwamuco, Augustine Rutisiri, Etienne Nsanzabahizi, Charles Byaruhanga, Claude Iyakaleme and two others have this morning been handed over to the Rwandan High Commissioner in Uganda Maj Gen Frank Mugambage, and they will be repatriated to Rwanda today.

While addressing journalists this morning, Minister of Foreign Affairs Sam Kutesa said that the decision is in line with the Memorandum of Understanding signed between Uganda and Rwanda in Angola on August21, 2019 and hopes Rwanda ‘reciprocates.’

“Let me set the record straight. We have withdrawn charges. These people were not arbitrary arrested. It was an act of goodwill and we hope it will be reciprocated,” Kutesa aid.

Maj Gen Frank Mugambage applauded the move that he referred to as a ‘step in the right direction.’