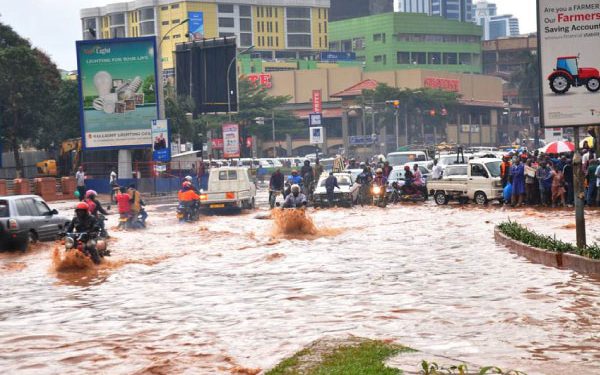 Last year, floods in Kampala were beyond devastating and on May 26, eight people were reportedly killed by floods in the city. In one photograph that went viral on social media, a chicken keeper who later got to be identified as Richard Kanyike, 63, was seen climbing to the roof of his house in an effort to save his chickens in Bunamwaya. He claims to have lost over 300 chickens after the flood levels rose to the windows of his house.

Just like Richard, every dark cloud that looms over Kampala spells doom for many as rainfall usually translates into heavy flooding in most areas of the capital city and this can be attributed to the inefficient drainage system in the city.

During the rainy seasons in Kampala and locations such as Kyambogo on Jinja Road, the slums of Bwaise, Kamwokya, Zana, Nateete, Nalukolongo, Ndeeba, Katwe, Clock Tower and Namasuba are washed way with floods.

In 2017, the Kampala Capital City Authority (KCCA) through its Director Engineering and Technical Services Justus Akankwasa revealed that by the year 2019, floods would be history in Uganda.  However, fast forward to 2020; the drainage system of Kampala is still inefficient as floods continue to ravage residents in flood-prone areas.

KCCA Deputy Spokesperson Robert Kalumba however does not agree that we can ever have a flood-free city because it is nowhere in the world.

“Even in countries with advanced drainage systems like France, there is flooding. As a population, we need to understand that the world is going through a catastrophic weather pattern and it contributes largely to the amount of rainfall in Kampala,” Kalumba commented when we reached out to him.

He however adds that it is no excuse for doing nothing about it but he is quick to point out that most of the flooding should be attributed to inconsiderate human activity.

“People build in wetlands and those very people go on to litter in the drainage systems. Areas like Bwaise, Kitante, etc were originally wetlands implying that when it rains, water has nowhere to go apart from flooding the roads and entering people’s areas of abode,” Kalumba says.

When all is said and done, the question stands, what have the authorities done about it?

“We are devising rational ways in which we can combat this issue. For example we cannot start demolishing all the houses or offices in Kitante but we must find ways of containing the floods such as building more streams of drainage. That is why today; if you are to pass there now we are doing some drainage work including some other flooding hotspots.” Kalumba told us.

When asked about whether government or the concerned authorities have gone out of their way to assist the people affected by floods in any way, he said that the major form of help that can be extended is to constantly advise people to avoid settling in wetlands as well as building more channels of drainage in such flood-prone areas.

“Due to economic constrictions, reaching out to each individual is close to impossible. We can only use the few available funds to improve drainage so that people do not have to go through with the floods in the short run.” KCCA Spokesperson Robert Kalumba.

By the magnitude of the problem and what the authorities are doing or willing to do about it, floods look to be a major problem the city will still have to deal with.

This can be attributed to the fact that Kampala’s population is reported to be over 1.8 million people which has increased construction pressure in a city whose current drainage system was planned in 2013 and is currently outdated due to the ever changing infrastructure and soaring population.

However a statement released last year by Akankwasa highlighted plans of focusing on improving drainage in flood black spots such as Kyambogo, Lugogo, and Lubigi among many other affected areas around the city.

The plans as well included widening roadside drains to facilitate an easier passage for heavy volumes of water and until then, individual caution seems to be the best way of maneuvering around this hiccup especially to individuals living in flood prone areas.