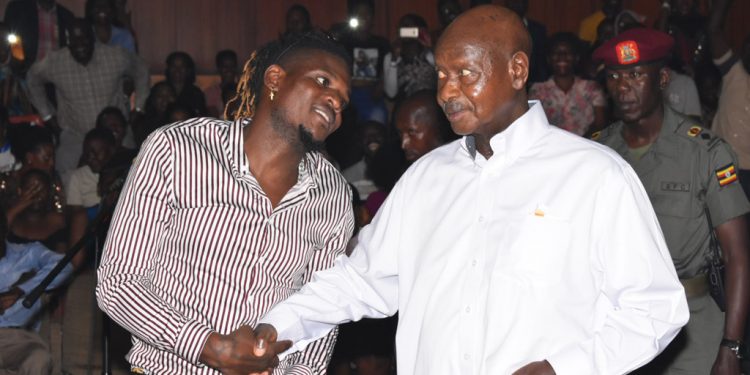 DJ Michael with President Museveni at an event last year.

Faded singer DJ Michael is one of those renowned ‘NRM artistes’, however our sources reveal that the singer has been banned from performing at NRM events.

Our source discloses that DJ Michael’s recent comments on promoter Balaam Barugahara are the cause of the prohibition.  On Monday this week, DJ Michael held a press conference where he hit at Balaam saying the promoter was blocking his appointment of meeting President Yoweri Museveni.

Balaam also came out and accused Michael of being ungrateful despite being given Shs30 million by the President a few months ago.

With such unfolding, Michael has been scrapped off the list of artistes set to perform this Friday at the NRM Delegates Conference at Mandela National Stadium, Namboole.

Speaking to DJ Michael during a phone interview, he revealed how there is a lot of bickering amongst NRM artistes and he’s not surprised that they have scrapped him off the list of performers for the Delegates Conference.

Michael claimed how Balaam is behind the ugly developments but vowed to always come out and speak the truth about troubles in their camp.

“Getting off the list will not force me to denounce NRM, a party I have supported for the past 15 years. I am still NRM and I will forever be,” Michael said.

He also revealed that the current conflicts won’t distract him from pushing to meet Museveni as he has a lot of personal issues he wants to engage the President.