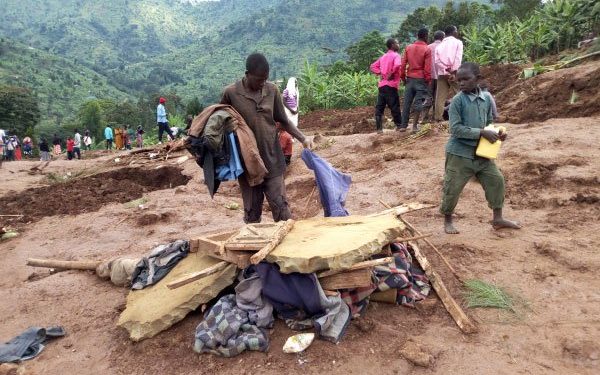 A man collects the remains of his property after the deadly floods. COURTESY PHOTO.

On January 10, 2020, a local newspaper ran an article about several residents still camped at Bubukwanga Refugee Transit Camp and Semuliki high in Bundibugyo patiently waiting for assistance after floods destroyed their homesteads. These were simply a portion of the 1,500 residents that lost their homes to the floods still waiting for resettlement to date.

The personal ordeals of the victims were less pleasant. For example Florence Mbambu, a 78-year-old who was previously housing seven children is one of those whose house was washed away by floods.

“I have been enduring the cold nights since we relocated to the camp at Semuliki high school and all my property was destroyed. I appeal to the government to find an alternative land and relocate us there,” Mbambu said.

This among others is the discomfort resulting from floods that ravaged 12 areas in Bundibugyo in December, 2019. The rain started in the night and viciously went on until 9.00am the following day leading to some houses being washed away, roads being blocked with some being washed away and tragically, lives being lost.

Apart from the loss of lives and damaging of roads, the major problem was the displacement of people as over 1500 people were left homeless, a problem that still lives on to date. People had to relocate to school and church buildings as well as taking refuge in relatives’ homes.

In such cases the government is expected to take action to compensate the affected section of the population and help them rebuild their lives after such disaster strikes, and so they did.

The government provided support through the Ministry of Disaster Preparedness with Shs20 billion to have victims in critical condition taken to hospital to get psychological and physical support, food and shelter.

The Red Cross received a donation of Shs16 million from MTN. They quickly responded by deploying in different Sub-counties for a rapid assessment of needs of the people on ground. They traced missing community members, recovered dead bodies and provided blankets as well as body bags for the dead bodies.

Some people applauded government swift action to try and save the victims, certain parties were discontented over the gestures of various corporate companies while the government was not doing enough in their opinion.

Chief among the disgruntled was Bwamba County Member of Parliament Richard Gafabusa who accused the Ministry of Disaster Preparedness and Refugees for not providing enough relief supplies to the hundreds of homeless people and thousands of the flood victims.

Gafabusa said that the victims received a handful of items from the government which did not tally to any extent to the number of victims. He described the gesture as unconvincing claiming that the Ministry delivered bags of rice without beans, blankets without tents of which the material provided was insufficient.

The government recently approved of an additional Shs32 billion to facilitate and compensate the flood victims. However, not much has changed in the camps where victims are currently living and still struggle to meet basic needs. The efficiency of the money is yet to be seen.

Last week, Parliament approved a Shs168 billion budget to facilitate the maintenance of roads that were affected by floods across the country as navigating through some of them is almost impossible even through the dry season.