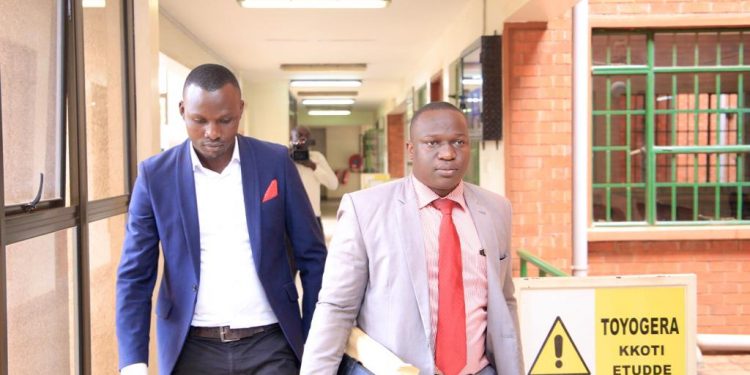 Alex Esagala with his lawyer the day he filed the suit at High Court in Kampala. COURTESY PHOTO.

Last year, Alex Esagala, a freelance photojournalist dragged New Vision to court for publishing his photo without his permission, something he said infringed on his copyright.

According to Esagala, New Vision’s Luganda newspaper Bukedde used a photo he had taken “under extreme circumstances including Police brutality” in April, 2018 during Makerere University strikes. The photo was subsequently published by Daily Monitor on April 17, 2018.

However, on November 25, 2019, Bukedde used the same photo in one of their stories published about strikes in Makerere University without his permission, and without accrediting him, something that infringes on his Copyright, according to the Copyright and Neighbouring Rights Act, 2016.

Yesterday, the Commercial Division of the High Court in Kampala served summons to New Vision Printing and Publishing Company limited to file their defence of the same in 15 days failure of which “the plaintiff will proceed with the suit and judgement may be given in their absence.”

Through his lawyers Kaggwa and Kaggwa Advocates, Esagala seeks Shs400 million as compensation for damages (Shs200 million in usage fees and Shs200 million in damages). The suits also says that the Defendant (New Vision) will meet the costs of the suit.

Esagala bases these claims to the fact that Bukedde newspaper’s daily circulation is estimated at over 40,000 copies a day and a combined following of over 2 million people on social media, so his work was served to all those people without him receiving any kind of gratuity from it.

The photo that is a subject of this suit won the photo of the year at the Uganda Press Photo Awards in 2018, an event that was sponsored by the European Union, Canon, Democratic Governance Facility (DGF) and the United States Embassy in Uganda.

Some Amudat residents were excited about seeing locusts, they thought it was food – says region CAO