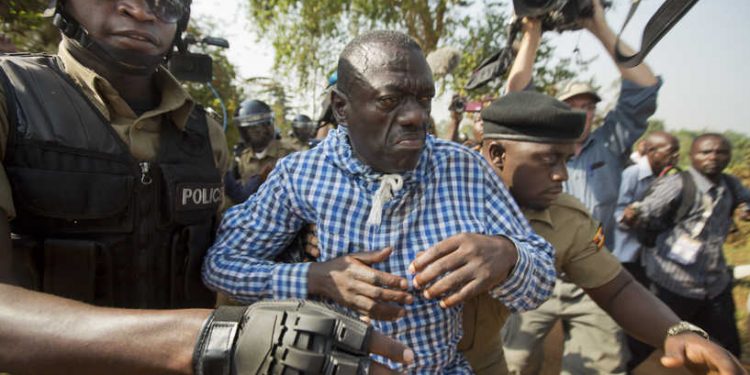 For two consecutive days now, Police has been engaging in battles with Forum for Democratic Change (FDC) strongman Dr Kizza Besigye in Jinja. Besigye spent the whole day yesterday at Nalufenya Police Station where he was detained after his arrest in the morning.

Jinja Resident District Commissioner (RDC) Eric Sakwa says as a district they have declared Besigye an unwanted visitor in Jinja. Sakwa says whenever Besigye visits Jinja, he causes chaos and that is the reason why he was arrested from Sunset Hotel yesterday.

“Besigye is like desert locusts; whenever he comes to Jinja he causes chaos. We have declared him an unwanted visitor,” Besigye said.

Sakwa claims whenever Besigye is to come to Jinja, he mobilizes ‘goons’ and pays them money to strategically burn tyres and disrupt the community.

“Besigye has no support in Jinja but he pays boda boda riders, fuels their bikes and they start causing chaos. As leaders we cannot tolerate that,” Sakwa vows.

Yesterday, the Speaker of Parliament Rebecca Kadaga summoned the Minister of Internal Affairs Gen Jeje Odongo to appear before Parliament and explain why Police is not allowing opposition leaders to hold meetings.

Do not do degrees just for the sake of celebrating after graduation; do a certificate and get skills instead of a degree without skills – Minister Muyingo