China deploys 100,000 ducks at its Xinjiang border to eat locusts coming from Africa 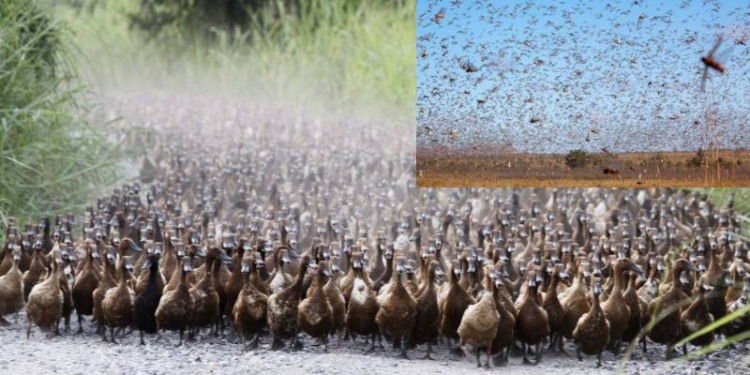 As Uganda wallows in dilemma over the best art in which to combat the locust invasion, the Chinese seem to be light years ahead as far as locust control is concerned.

Latest news reaching our desk is that the Chinese government has dispatched a gaggle of ducks at its border in preparation for a possible swarm of locusts anticipated to be coming from Africa.

According to Chinese media outlets, the ducks have been gathered at the Xinjiang border where China meets India and Pakistan.

Early this month, their Pakistani neighbours declared a national emergency as a result of locusts annihilating their food crops. The country’s Premier Imran Khan declared the invasion as the worst locust attack in decades.

From a video shared from state-run news-site CTGN, one could observe thousands of ducks marching towards the Xinjiang border to face the locusts. According to the Chinese media, the birds dubbed the duck-troop can be more effective than pesticides.

The swarms were initially sighted in December and have stopped at nothing to wreak havoc in Kenya, Somalia, Uganda, and Ethiopia as they continue to ravage and threaten food supplies.

The UN has however warned that a second batch of locusts could threaten the food security of over 25 million people across the region. Uganda itself continues to struggle with the insects with yet another swarm of a bigger magnitude set to land in the country.

Efforts to combat the insects are still futile in Uganda and the country could pick a leaf from our Chinese friends.