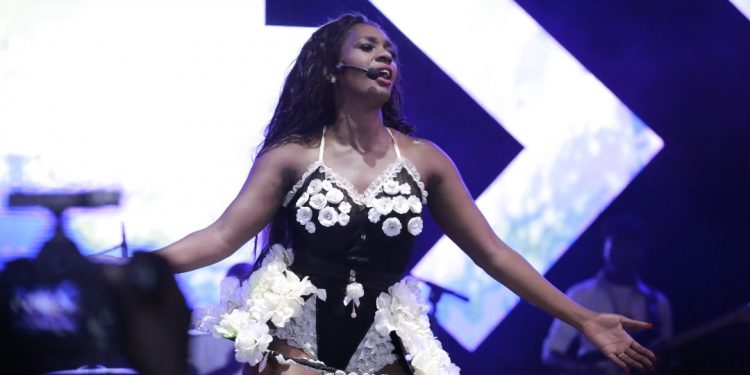 The King Herself, Cinderella Sanyu, aka Cindy impressed fans and revellers on Saturday night at her maiden concert dubbed “The Boom Party Concert” that out-lived all expectations and raised the bar higher than ever for female Ugandan artists.

It was more than just a “Boom Party” for many of the Cindycates who were treated to nonstop entertainment from artists like Kent & Flosso, Maro, Karole Kasita, Rabadaba, and Silver X who sent the crowd wild with excitement with every stage performance.

Once The King Herself took over stage revellers the crowd roared with excitement welcoming the star of the night who wasted no time entertaining her fans with “Ayokya Yokya” and “Tebimala”, “One and Only” giving her audience a real Cindy experience. She went through three different sessions on stage with beautifully designed wardrobe changes that lit up the stage even more.

Tumukunde says not everything Museveni says is a law

This entire week has been filled with Lt. Gen. Tumukunde stories after the declaration of his intentions to contest for the Presidency in the general elections next year. The general has talked all sorts of things concerning the governance of this country and the state of the opposition.

The fact that Tumukunde came out to show interest in the top office of the land that is currently occupied by his former boss has raised questions among the public asking whether his intentions are pure, and that he is not just in the opposition to disorganize them.

While appearing on Capital FM’s talk show The Capital Gang over the weekend, the former Security Minister narrated that unlike other NRM he has not always been in the armpits of the President, defying his orders, legally, on several occasions.

One such occasion, Tumukunde narrated, was when he wanted to stand for Rubabu in Rukungiri, and the President asked him where he got permission to stand.

“Eriya Kategaya called me and said that I need clearance from the President to stand. I told him that is not what the law says. The President thought that in order to stand you have to first get permission. The problem with Ugandans is they think everything Museveni tells them is the law,” Tumukunde said.

On Wednesday last week, Police got a breakthrough in the shooting of Daniel Kyeyune, who was a People Power supporter.

According to Police Spokesperson Fred Enanga, a businessman in Nansana where the incident occurred handed Police footage of the incident. Enanga said that Police was set to analyze the footage and establish who exactly shot Kyeyune.

“The task team from Kawempe Regional Police Headquarters is still furthering the investigations. They have managed to retrieve some CCTV footage from the area and they are working,” Enanga said.

He added, “They gave me a brief that chances were high they would get that footage. It clearly indicated who shot Dan Kyeyune and under what circumstances.”

Bobi Wine responds to Muhoozi: You and your father should stop violence actions, only free men can negotiate

In his tweet, Muhoozi claimed that his ‘supporters’ have always requested him to do so but he has only been reluctant.

Through the same channel, the People Power Movement leader has replied to the First Son. The presidential hopeful says he has no problem holding talks with Muhoozi but it must be done on conditions.

“I am open to transparent talks with anyone but before that, you and your father should stop actions that have left many orphans, widows and torture victims,” says Bobi Wine in a tweet.

Bobi Wine urged the regime to start respecting human rights and putting in practice the rule of law.

PHOTOS: The King Herself Cindy fills out Lugogo Cricket Oval on Saturday night