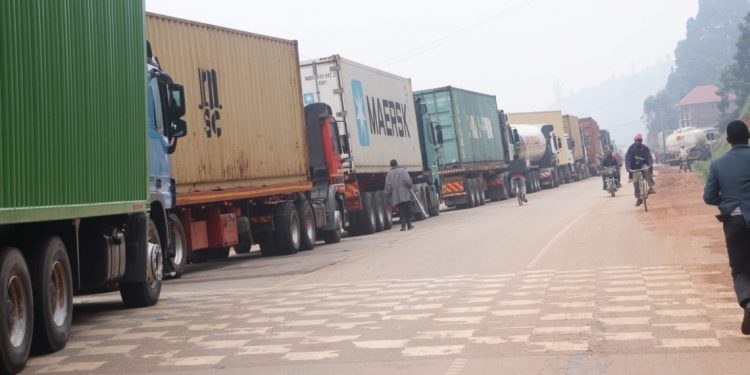 Apart from the first 55 Coronavirus infections that were confirmed up to until April 15, 2020, the next 19 cases confirmed henceforth have been truck drivers of cargo from Kenya and Tanzania.

The first two (one Kenyan and one Tanzanian) were returned to their native countries to be treated from there but a few later, the World Health Organisation said that all infections should be treated and included in the total number of infections in the country where they tested positive from.

This means that Uganda is now recording only imported cases from our neighbours and Ugandans feel it undermines the effort put in by government and the Ministry of Health to contain the spread of COVID-19 in the country.

Currently, Ugandan social media is awash with tweets and posts calling on the government and Ministry of Health to quickly fix the border problem that has seen the number of infections in the country rise, or stop the truck drivers from crossing over to Uganda altogether.

This comes as 11 new cases were confirmed by the Ministry of Health last night, and all are truck drivers. Ugandans relate the current trend of these imported infections to that of the 1980s when truck drivers through Mutukula border with Tanzania highly contributed to the spread of HIV in Rakai, Uganda.

President Museveni through his addresses has repeatedly said that cargo needs to keep moving in and out of the country to keep the essential parts of the economy running amid the lockdown, but Ugandans are wondering what is so important in the cargo that cannot wait.

Some Ugandans are proposing truck drivers wait at the border until their COVID-19 test results come out, but that seems to be impractical as the Minister of Trade, Industry, and Cooperatives Amelia Kyambadde said that on verge, Uganda receive about 800 cargo trucks every day, and keeping them waiting at the border would cause nothing but commotion and delay.

Yesterday, the Minister of Internal Affairs Gen. Jeje Odongo said that they are looking at the possibility of introducing relay truck driving where drivers handover the trucks at the border, the Ministry of Health disinfects them, and then they are driven by Ugandan drivers to their destination in an effort not to import the infections.

Today in Parliament, MPs have raised concern over soaring numbers of foreign truck drivers being diagnosed with COVID-19. On behalf of government, Finance Minister Matia Kasaija said a solution will be announced by Monday – after factoring in diplomacy.

With the imported infections rising yet the majority of Ugandans accepted to stay home during the lockdown, majority of them are asking whether it is even worth it.