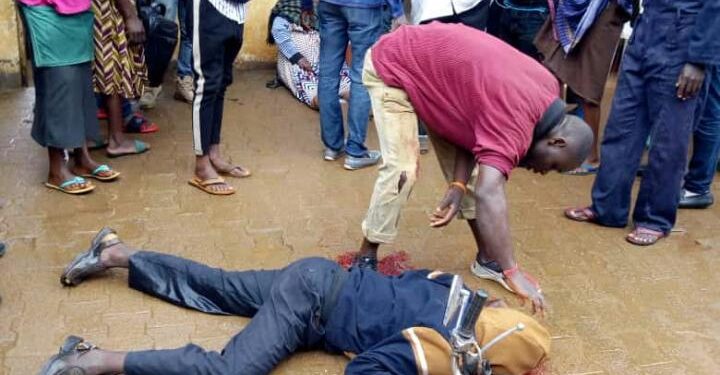 In many of President Museveni’s addresses during this lockdown period, he has repeatedly said that boda bodas would only be allowed to carry cargo, and not people. In the same vein, he has also warned Police and Local Defence Unite (LDU) officers against using excessive force, and last month over 16 of them were charged and remanded to prison for the atrocities they committed.

It looks like some of them have not taken heed to the President’s warning, as one of them has shot dead a yet-to-be-identified boda boda man that was carrying a pregnant woman, according to videos, one of them from a CCTV camera that are currently circulating on social media.

In the CCTV video, the LDU officer who was seated outside an arcade watched the pregnant a lady get on the motorcycle before shooting the boda boda man and running away.

Eyewitnesses are heard in the video confirming that it indeed was an LDU officer that shot the man, as they carried the pregnant lady away for first aid.

The body of the man, soaked in blood was a few minutes later picked up by Police and taken to Masaka Regional Referral Hospital mortuary. The pregnant woman has also been admitted at the same facility as she sustained injuries.

Mr Muhammad Nsubuga, the Southern Regional Police Spokesperson says Police is already on the hunt of the officer. He confirmed that the incident happened at about 1.15 pm along Elgin Street in Masaka Municipality outside Byansi Clinic.