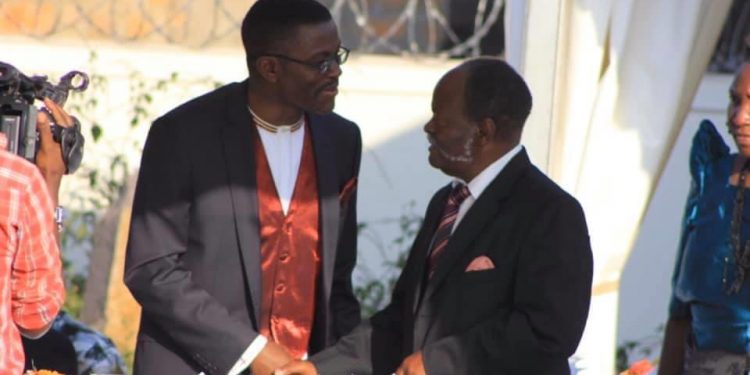 I never want to write about people and their personal possessions but if a lie is consistently told, some gullible people start believing it. The world has never been short of such people.

There are a few people who keep writing that Katikkiro Charles Peter Mayiga has become so wealthy since his appointment to that position in May 2013 by Ssaabasajja Kabaka. It is far from the truth. If anything, his income has actually gone down. When asked what Mayiga has stolen since that is the implication, they quickly point to his private residence in Lweza.

Mayiga and his wife Margaret bought the land in Lweza in 1995 and started building their home in 1996. It is private mailo land. They were keen to occupy the house before the end of the millennium and did so in 1999. It was incomplete. He built it in the same way most Ugandans who genuinely make their money build their homes. They take time, one brick at a time. I was an undergraduate student at Makerere University and I lent a hand lifting a box or two to help them move into it.

In fact, in June 2013, with the official residence (Butikkiro) still occupied by government, Mayiga held Embaga ya Ddamula at Lweza which was attended by over 1500 people. I was Secretary to the organising committee.

Embaga ya Ddamula is a function a Katikkiro organizes to celebrate the appointment and managing to keep Ddamula from other people interested in it immediately after the Kabaka has handed it over to him. It is a cultural function.

Although the house is palatial, it is not something out of reach for him and his wife. I have known the Mayigas for many years and they like good things. But they mind so much about their name that they ensure the good things in life come from genuine hard work not through ‘under the table’ deals.

To date, if you combine the years Mayiga and his wife have been working, it comes to about 60 years. So how can a couple that has a combined 60 years of working experience fail to build the kind of home in which they live today? If they worked for a combined 60 years and failed to build such a house, they would be total failures.

But also, this is not the only property the Mayigas own. They have other properties because they invest the money they make wisely. They don’t have to steal to own what they own. The Kabaka has seen Mayiga from 1991 when he was recruited into Mengo. If he was a thief, he wouldn’t have appointed him Katikkiro. Kabaka is ‘Maaso Moogi’ (good eye for things) so he knows what goes on in his Kingdom. If he was a thief, he wouldn’t have made seven years in office.

The other thing that people like to point about Mayiga’s alleged corruption is the Toyota Land Cruiser V8 in which he travels. Anybody interested in that Land Cruiser can establish its ownership with URA. In whose name is the car registered? A simple URA search can reveal its owner.

But we don’t even need to forget that for the first one year of his Katikkiroship, Mayiga drove his own personal car traversing the vast Kingdom reaching some of the remotest corners where roads are a challenge even for a 4×4. He never charged the Kingdom for driving a personal car as Katikkiro. He never complained as well. He waited until when the Kingdom could give him an official car.

Mayiga left a thriving business in Kikuubo to serve the Kabaka in 1991. If he had stayed in Kikuubo, he would be one of the wealthiest people in Kampala today. His friends acknowledge that fact as he was the first among them to even buy a car because of his Kikuubo business. Simply imagine if he had refused to serve Kabaka, how wealthy would he be?

After his Katikkiroship, it will be highly unlikely that he will return to some of his businesses such as law practice he co-founded in 1994 because it would be hard for a former Katikkiro to stand before a Magistrate representing a client. That hasn’t given him a license to steal but that thought has made him wiser to invest what he genuinely makes. By the way, his law firm celebrated its silver jubilee last year at Kampala Serena Hotel. How many businesses if not run properly celebrate 25 years of existence?

How many people can sacrifice their income, youth, and life to serve the Kingdom? In 2008, Katikkiro Mayiga paid a heavy price when he was abducted by government forces for one reason — serving his Kabaka. He was kept incommunicado alongside MPs Betty Nambooze and Medard Lubega Sseggona. He went through hell and even his friends asked him to stop serving the Kabaka but he refused because he always sees the bigger picture — a rare gift. As we abuse him, we shouldn’t be forgetful of who he is.

The writer is a communication and visibility consultant who has worked closely with Katikiro Mayiga for a long time.

FA Cup to resume this weekend with quarterfinals, to air on StarTimes