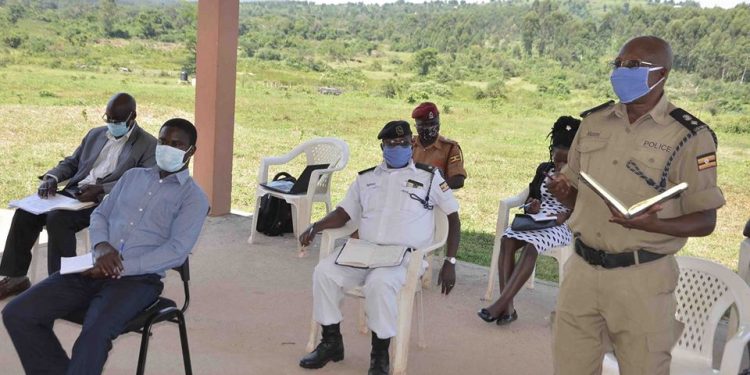 The Gomba COVID-19 District Taskforce in a meeting. COURTESY PHOTO.

In one of the many COVID-19 addresses to the country by President Kaguta Museveni, he thanked the locals and their LC 1 leaders who have taken it upon themselves to identify and report strangers in their communities so that they may not spread the deadly virus to them.

Well, it looks like those in Gomba district have taken this a little bit too far. News coming in shows that some residents of Buyanja village in Maddu Sub-county and those in Mamba village, Kyegonza Sub-county have made it a habit to beat up people they suspect to be COVID-19 patients.

This time around, it is alleged that locals in those villages beat up two Congolese nationals, threatened them with machetes, and handcuffed them, after suspecting them of being COVID-19 patients, according to Gomba District Health Officer, Dr George Kiwanuka.

During a Gomba COVID-19 Taskforce meeting in Kanoni, Kiwanuka said that these actions scare away people who have COVID-19 symptoms in fear that they will be subjected to these beatings.

Kiwanuka used the meeting to warn locals and told them to desist from using mob justice to solve matters.

In the same meeting, Gomba district Resident District Commissioner (RDC) Ruth Sabiiti Kashaka also asked Police to arrest leaders in Maddu for impersonating her to issue fake documents to people seeking permission to move around, at a fee of Shs50,000 per pass.