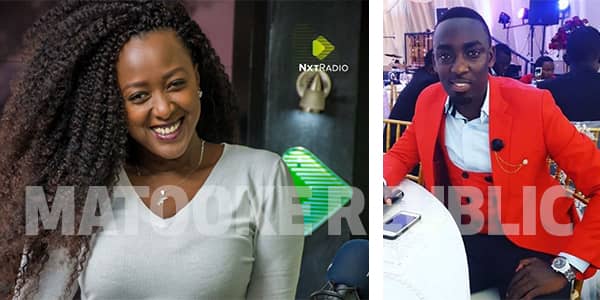 This evening, a video of a live radio show dubbed Nxt Transit that airs on Nxt Radio has made rounds on social media. In the video, a heated argument erupted between show co-hosts Karitas Karisimbi and MC Ronnie Vex on whether it is okay to call a woman ugly.

As an example, Ronnie said that Karisimbi’s hair looks like that of those women who rent usually do, and this sparked off an even louder reaction.

Karitas felt like the statements made by Ronnie likening her hair to that of ‘mizigo’ women were derogatory and disrespectful, so she decided to storm out of the studio, during a live show, on live camera.

The media personality has run to her Twitter page to express her dissatisfaction and now demands an apology from her show co-host.

“So today during Nxt Transit on Nxt Radio, MC Ronnie Vex said it is okay to tell a lady she is ugly. I found it very offensive. Then pointing at me, he goes ‘it is like saying your hair looks like hair done by mizigo women.’ How dare he! He has to apologise,” Karitas tweeted, adding that Ronnie crossed the line, and disrespected her.

JUST IN: Police say the fire outbreak at Kasubi Royal Tombs did not cause substantial damage