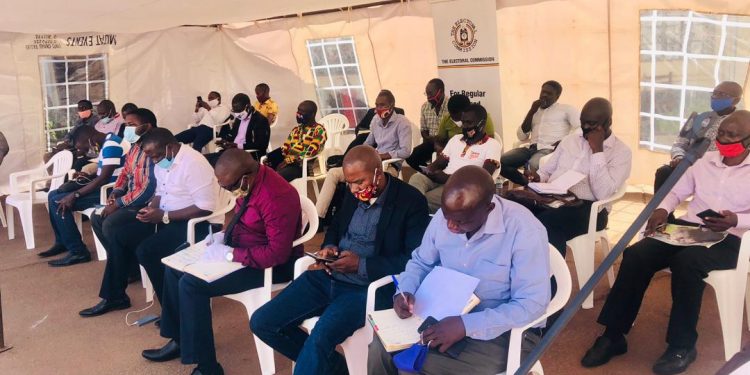 The Electoral Commission (EC )top management yesterday Thursday, June 18, met and held a lengthy discussion with Online Media owners and editors ahead of the 2021 general elections.

EC Chairperson Justice Simon Byakama chaired the meeting. He urged online media practitioners to exercise professionalism and help to walk the journey with his team.

Byabakama also used the engagement to answer pressing questions about allegations that the EC is organizing a ‘scientific election’ and the possibility of President Museveni having influenced the new elections roadmap.

“We’ve had a series of activities and none of them was scientific. We started with voter registration and later displaying of voter registers; all these were done physically.

But we can all agree that the issue of campaign rallies should be handled differently, given the sensitivity of the times we are in. Rallies attract all sorts of crowds, engaging in different activities that usually border with merrymaking. I need you to be honest and tell me, how would we ensure that the Ministry of Health guidelines are observed during these rallies?

And we have also said that the actual voting, which is the icing on the cake, shall be done physically, but with people observing the WHO guidelines. Now is that really a scientific election?” Byabakama argued.

The EC boss also dismissed allegations that the 2021 election roadmap might have been influenced by President Museveni;

“During one of his recent addresses, the President made it very clear that thinking about holding an election right now would be a mistake. So how could the same person influence EC to have an election?” he wondered.

On the proposal by some political groups that the EC extends voting by at least six months to allow for political campaigns to be held the usual way, Byabakama argued that the Electoral Commission is mandated by the constitution to hold elections in a particular period and that EC has no mandate to change that.

“Article 61, clause two (2) of the constitution is the commanding article for EC. And it demands that elections are held within the first thirty (30) days of the last 122 days before expiry of government.

There’s no provision for an option of failing to comply with that article by EC!

Only Parliament can sit and a certain percentage agrees to amend the constitution,” Byabakama explained.

The online media practitioners were grateful that the Electoral Commission had finally reached out and even dialogued on how to work together.

“This is a great step forward towards a great working relationship. We’re grateful and we pray we continue these engagements to help both EC and Uganda as a whole, since we reach everywhere,” said Howwebiz owner Dr Innocent Nahabwe.

Online media owners and editors promised the EC to deal with the fast growing problem of fake news.

They also used the opportunity to pitch to the EC top leadership, to consider them as advertising platforms that they can use convey the commission’s several communications and messages to the public.