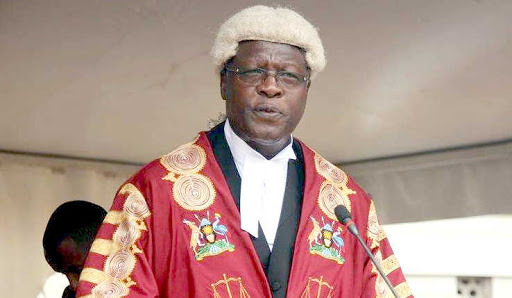 Yesterday, Bart Katureebe retired from his position as the Chief Justice of Uganda after spending five years at the helm of the Judiciary. Katureebe made 70 years today, reaching the legal age for retirement of judicial officers.

Katureebe has dedicated 36 years of his life to public service, 21 years in government for which he was a Minister for 13 years, and 15 in judicial service for which he has been a Chief Justice for five years since his appointment by President Yoweri Museveni in 2015.

As he goes to his retirement home to graze his goats and chicken, we have gathered some of Katureebe’s achievements during his tenure as the Chief Justice of Uganda.

Passing of the Administration of the Judiciary bill into law

Early this month, Parliament passed the Administration of the Judiciary bill into law. The law, which Katureebe sternly advocated for, strengthens the independence of the judiciary, improves efficiency and effectiveness of the courts, streamlines their administration and most importantly, improves retirement benefits for judicial officers.

One of the clauses of the law provides for the Chief Justice and his deputy to receive their full monthly salary after retirement for life.

Last year in September, the Judiciary unveiled the Electronic Court Case Management Information System (ECCMIS) to improve efficiency in the administration of justice.

The system tracks the progress of all aspects of a case from the initial filing through disposition and appeal, and updates relevant players on the progress of their cases.

Digitalizing the Judiciary improves efficiency, transparency, and helps eliminate deliberate and administrative ineptitudes that frustrate the delivery of justice in courts of law.

Construction of the Appellate Courts

In his effort to transform the working environment of the Judiciary, Bart Katureebe has overseen the commencement and progress of the construction of the Appellate Courts at the Judiciary headquarters in Kampala.

The Shs63.9 project will have twin buildings housing the Supreme Court and the Court of Appeal, and it is expected to be ready in two years.

Installation of CCTV cameras in 15 Court Registries to curb corruption

During celebrations to mark the opening of the New Law Year in 2016, the Katureebe revealed that the Judiciary would install CCTV systems in several Court Registries as a way of increasing their monitoring and curbing corruption tendencies in courts.

The project has since been accomplished with support from DANIDA at a cost of Shs128 million. The CCTV cameras have since been installed in registries of the Kampala-based High Court Divisions of; Criminal, Anti-Corruption, Execution and Bailiffs, Land, Family, Civil and Commercial.

They are also installed in the Chief Magistrates’ Courts of Makindye, Nakawa, Buganda Road, Nabweru, LDC, Entebbe and Mengo. The system comes with a monitoring screen in the Registrar/Chief Magistrates chambers to enable the monitoring of activities by the junior staff at the registry.

Introduction of video conferencing for courts

Before COVID-19 hit the world and forced individuals, organizations and government departments to use video conferencing software to hold meetings, the Judiciary had already adopted the technology to conduct cases.

Officially launched last year by Kartureebe, the system helps in expediting the handling of criminal cases at a magisterial level while at the same time minimizing the cost of transporting suspects. During the hearing, parties like interpreters, law enforcement, the accused and the court are connected in real-time, in different locations.