Scientific election: How will the deaf and blind benefit from radios and TVs? – People with Disabilities MP Asamo asks 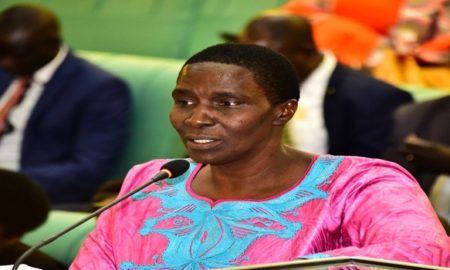 Hon. Hellen Asamo, the Parliament representative for People with Disabilities.

Last week, the Electoral Commission (EC) released a revised roadmap for the 2021 general elections that has public rallies banned and candidates advised to campaign through radios, TVs and the internet due to the COVID-19 pandemic. This roadmap has been widely criticized by the public including politicians especially those on the opposition.

The matter has been debated in Parliament today and that is when Hon Asamo Hellen, the representative for People with Disabilities (PwD) wondered whether the visually impaired and those with hearing loss were put into consideration when the EC was coming up with this revised roadmap, and thinks it goes against the principle of “leaving no one behind.”

Kampala Central MP Muhammad Nsereko also said that it is unfair that the proposed ‘scientific election’ through the use of radios and TVs does not cater for the special interest groups like the elderly, the deaf, and the blind among others and urged the government to ensure that everyone is catered for in the electoral process.

Another worry is that privately owned media houses may deny some candidates airtime to campaign.