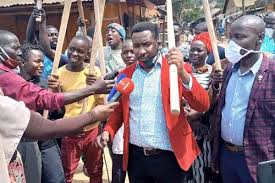 Two months ago when water in Lake Victoria rose to record levels and caused flooding along its shores in Uganda and Kenya, the National Environment Management Authority (NEMA) among other factors attributed this to those that have encroached on the wetlands.

As such, on June 8, 2020, the Authority through a letter by Executive Director  Dr Tom Okurut told all those that had put up structures on the shores like at Mulungu, Munyonyo, and Gaba to vacate those places and issued a 21-day ultimatum for those that had settled in the wetlands.

The 21-day ultimatum is edging closer and NEMA has told all those that encroached on the Kansanga wetland in Makindye Division to demolish their houses and vacate the place, or NEMA will use other means to have them evicted.

This move is about to affect over 700 homes, according to Makindye East Councilor Ismael Tabalamule.

Yesterday, Makindye East MP Allan Ssewanyana visited the area and proposed that these people should be compensated by the government since they settled in the area before the NEMA Act was enacted.