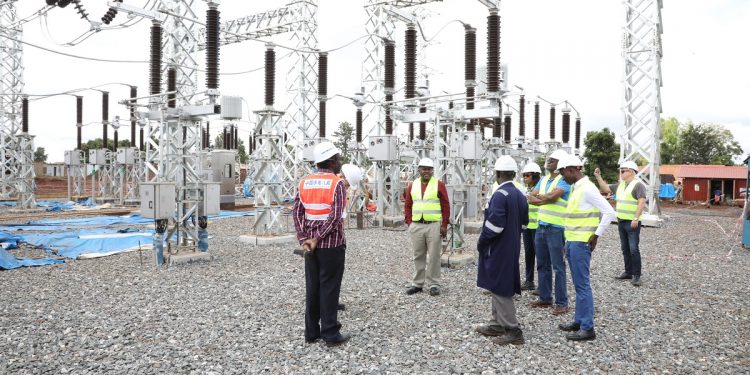 Umeme’s Selestino Babungi (in red shirt) with one of Umeme’s Board Directors at the new and bigger Lira Integration Substation in readiness for the upcoming 600 MW Karuma Hydro Power Station. As part of the UGX310 billion, Umeme has allocated significant resources to evacuate and distribute power from the in-construction Karuma and 16.5 MW Siti II Hydroelectric Power stations.

Following approval from the Electricity Regulatory Authority (ERA) Umeme has revealed their US$83.3 million (Shs 310 billion) investment plan to increase grid connections, as well as better the reliability of power and service to its customers.

The plan is also to align with the government’s Electricity Connections Policy 2018-2027, which targets to increase access to electricity from the current 28 per cent to 60 per cent by 2027 and then 80 per cent by 2040.

In a statement released by the power distributor, Selestino Babungi, Umeme’s Managing Director, said that Shs310 billion that is being invested this year is part of a larger US$450m (Shs1.7 trillion) 2019-2025 investment agenda.

“In 2020, Umeme, secured approval from the Electricity Regulatory Authority (ERA) and has gone ahead to allocate US$83.3 million to six critical areas of the business, which when completed, will see us reliably connect over 300,000 customers this year alone,” said Babungi.

According to the statement, the six areas include:-

“With the new capital investments we expect to boost our new customer connections to about 250,000- 300,000 per year, while at the same time investing in leveraging technology and business process improvements to reduce power losses and continue delivering more reliable power affordably,” he said.

Last year, Umeme connected 180,000 new customers, 178,152 of whom financed by the Government of Uganda and development partners under the Electricity Connections Policy.

“Umeme would like to reassure especially our government stakeholders that we are committed to supporting the government of Uganda’s agenda of modernising her people, create jobs, and increase household incomes through provision of efficient electricity distribution services,” said Babungi.

According to a project document seen by this reporter, the bulk of the money, US$26.27 million (Shs98 billion) will be spent on converting the remaining 150,000 customers to prepaid metering (Yaka) so as to further reduce energy losses and improve on customer service.

Umeme will also invest US$9.23 million (Shs34.7 billion) to evacuate power from the soon-to-be-finished 16.5 MWSiti II Hydroelectric Power Station in Bukwo District, on the Eastern borders of Uganda. An additional US$5.99 million (Shs22.5 billion)has been allocated to build a feeder line to Mbale’s Tangshan Industrial Park.

US$3.4 million (Shs12.7 billion) has been allocated to improving power in the Mukono Industrial Area as well as extending reliable power to National Water & Sewerage Corporation’s (NWSC) new water plant in Katosi, Mukono District. The plant is scheduled to go live in February 2021.

To further support industrialisation efforts in the country, at a cost of US$1.82 million (Shs6.8 billion), a switching station will be built at Matugga on the northern outskirts of Kampala City to improve power reliability at the  Liao Shen Industrial Park, Kapeeka and the surrounding Bombo area. An additional US$1.66 million (Shs6.2 billion) will be spent on replacing the Bombo substation.

The company also plans to investUS$1.93 million (Shs7.2 billion) in operational and network management systems to ease the provision of the services to its customers

For Northern Uganda, US$1.56 million (Shs5.8 billion) has been allocated to an evacuation line from the new Karuma Hydro Power Dam, to address demand growth in and around Gulu district. Another US$1.32 million (Shs4.9 billion) will be spent on reconfiguring the Gulu substation to supplement and improve the old substation infrastructure and address the overloading of the existing power transformers.

In Kampala, Umeme is replacing what it says is obsolete power transformers and switchgear at the Ntinda substation with new 33kV gear to address the quality of supply in the Ntinda area at a cost of US$2.1 million (Shs7.8 billion). US$1.7 million (Shs6.3 billion) will also be injected into a new substation in Nakawa, Kampala to address the growing power demand from housing developments and industrial areas in the Nakawa and Bugolobi areas.

In Entebbe, to meet the growing needs of the real estate sector as well as the ongoing Entebbe Airport expansion, a new substation is being built at Nakasamba SS in Entebbe at a cost of US$1.38 million (Shs5.1 billion).

Other projects includeUS$1.81 million (Shs6.8 billion) to be injected into network refurbishment in Njeru Municipality, Jinja district, as well as US$1.8 million (Shs6.7 billion) allocated to injecting new transformers in the network across the country.

“Umeme supports the government of Uganda’s post-COVID-19 recovery strategy of import substitution. Our investment plans are a further confirmation of our commitment to Uganda and the people of Uganda that we are proud of the journey we have walked with them thus far and are looking forward to continuing powering Uganda’s progress and development,” said Babungi.

Only five countries in Africa are yet to register a COVID-19 death, Uganda is one of them