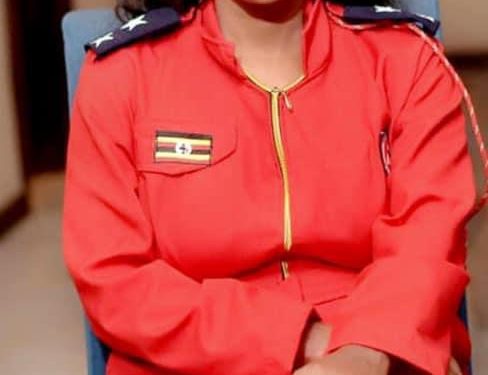 You all know her as Bad Black but no one knows just how Bad Shanita Namuyimba is – not even Balaam. Just weeks after bagging millions from NRM’s Balaam Barugahara, controversial socialite Shanita Namuyimba aka Bad Black yesterday changed her earlier stance and posted photos of herself donning a red overall with a People Power badge along with a matching red beret.

Critics were quick to point out that Bad Black was trying to provoke the ruling NRM party, especially businessman Balaam, who is known to court celebrities for his party, into sitting her down in another meeting that would end in giving the socialite more money.
Other people observed that Bad Black is observing the actual meaning of the phrase ‘Okwebereramu,’ that People Power leader Hon. Kyagulanyi Ssentamu aka Bobi Wine has preached to his followers from the time he kick-started his political journey.

Bobi Wine has relentlessly urged his supporters to ‘accept and eat any handouts,’ if offered by the ruling party or the state, but stick to voting for change when the time for elections comes.
A few weeks back, businessman Balaam held a meeting with Bad Black and her lawyers and paid her an undisclosed amount of money. Balaam said the money had been mobilised by NRM supporters to pay Bad Black for the advert she recorded urging sex workers to stay away from truck drivers in order to stop the spread of Covid19.

Bad Black had earlier threatened The Ministry of Health with a Shs 500m suit and had also launched a social media attack on Minister Dr Ruth Aceng and Permanent Secretary Dr Diana Atwine.
Before receiving the money, Bad Black had demanded that she wanted to meet President Museveni, and she kept mentioning that she was an NRM supporter.t
However, as she celebrated her 31st birthday yesterday, Bad Black, in her usual provocative style, praised her looks in red, in a short video she posted on her Face Book wall.

This morning, Bad Black went ahead and replaced both her Face book profile and cover photos with her new photo in her red overall and a red beret.
And there’s something more to Bad Black’s People Power uniform; it’s complete with pips which is a clear indicator that she’s not your ordinary People Power supporter, but a high ranking official.