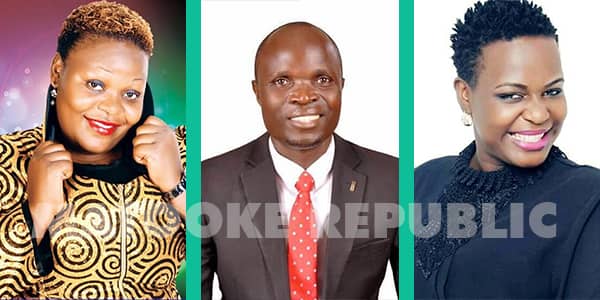 As the elections loom, many of the celebrities that had ‘FOMO’ for 2021 have suddenly gone silent about their political ambitions. Here is the list;

Immediately after Bobi Wine turned out to be a ‘hit’ on the political scene, Golden Band maestro, Ronald Mayinja was among the first celebrities to declare his intentions to contest in the forthcoming elections. He even released his campaign posters for Gomba MP Seat.

However, Mayinja’s fortunes to stand have a series of drama that eventually maybe forced him to go silent.

The Bunkenke singer was first termed a traitor by People Power supporters when he made a surprise appearance before President Museveni in Kiboga alongside the infamous Tubonga Naawe crew as the ruling NRM celebrated the constitutional amendment that removed the age limit.

Nevertheless, a month later he won their hearts back when he performed Bizeemu song in front of Museveni during Catherine Kusasira concert at Serena Hotel.

His comeback did not last for long as different reports made rounds on how Mayinja had met with Museveni and was bought off from the struggle. He was additionally said to have been awarded a brand new ‘Mpenkoni.’

Though Catherine Kusasira is said to have been a ‘darling to Museveni’ for a while, she got political ambitions after Bobi Wine’s infamous Arua saga. The President sent her to deliver a Shs20m token to the family of Bobi Wine’s driver, Yasin Kawuma (RIP) hence the public deciding to name her ‘minister for condolences.’  The singer decided to use the criticism to water her political ambitions as she hinted on running for a political office in Kampala.

Eddy Yawe has given shot to political offices twice, first in 2011 for the Kampala Central and second was in 2016 against Ibrahim Semujju Nganda for the Kira Municipality Seat. After the emergency of Bobi Wine, Yawe saw opportunity to give politics a third try and eventually bury his “political curse.”

He moved with Bobi Wine for a while, but before he could even gain political capital he used the back door and went silent only to appear recently as he ‘unveiled’ his yet to be completed mansion.

To show her political seriousness, Namulindwa decided subscribe to the People Power Movement where she was even appointed a coordinator. Her appointment did not sound good music to the ears of her bosses as she was allegedly fired from Bukedde TV for that reason. As we compile this article, Namulindwa already relocated to the US and is only minding her personal business.

For those that used to enjoy NTV Uganda Luganda news, we guess you remember reporter Julius Ssenkandwa. The journalist decided to put down the camera and microphone to give Luwero Triangle Minister, Dennis Galabuzi a run for the Busiro North constituency seat.

However, as elections loom closer, we don’t know whether Ssenkandwa still has ambitions to contest since he has been very silent.

The Ssisimuka boss however has never come back to give an update from the meetings. We wait maybe until when nominations start.