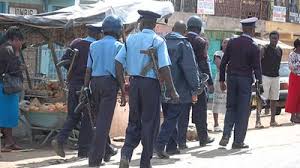 Police in Busia Kenya has arrested and quarantined one of their own officers who was caught having s3x with a female COVID-19 patient quarantined at the Agricultural Training Centre (ATC) in Busia.

According to Kenyan media , yesterday (on Thursday) at around 10pm, Police Constable Emmanuel Ng’etich, engaged a COVID-19 patient in a conversation something that puzzled another officer who decided to go and inform their superior.

The officers came through to check what was happening only to find that their colleague had disappeared with the patient.

“They heard noise and commotion emanating from the women’s ward,” a news site in Kenya quotes the police statement.

It adds, “The police officers rushed there and found all the female patients outside, complaining that Police Constable Ng’etich was raping the lady.”

One of the women quarantined at the facility, however, told police that the said-COVID-19 patient had consented to sexual intercourse with the officer.

Police Constable Ng’etich has since been arrested and quarantined at the same facility. The cop’s samples have also been taken for coronavirus testing.