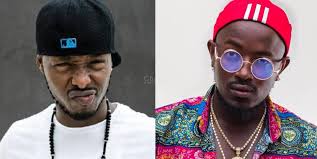 Following the resignation of the Uganda Music Association (UMA) President Sophie Gombya who opted for politics, From Apass to Gravity Omutujju and now Eddy Kenzo the musicians have questioned the acting President Ykee Benda’s ability to lead the association.

Last evening Kenzo was asked if he is happy to be ruled by Ykee Benda and the multi award winner responded that Benda has no credentials to rule.

“I respect Ykee Benda but in my view I think he is still a boy and has no experience to rule this industry,” said Kenzo

A statement which didn’t go well with the Superman hit maker as he asked fellow singer Kenzo to accord him some respect while mentioning his name. Before reminding him how he’s now a father.

“My boy sees me as the smartest man in this world because am his father and not a boy,” Said Ykee Benda

Ykee Benda also threatened to expose the BET award winner if he ever refers to him as a boy again.

“Never ever refer to me as a boy, I will expose you if you do it again,” Ykee Benda stated

The furious UMA President Ykee Benda also warned the other musicians who have been disrespecting him and cautioned them to immediately stop before he takes another step.

“And you other artists that have been saying that I am young to be your president stay warned,” he said