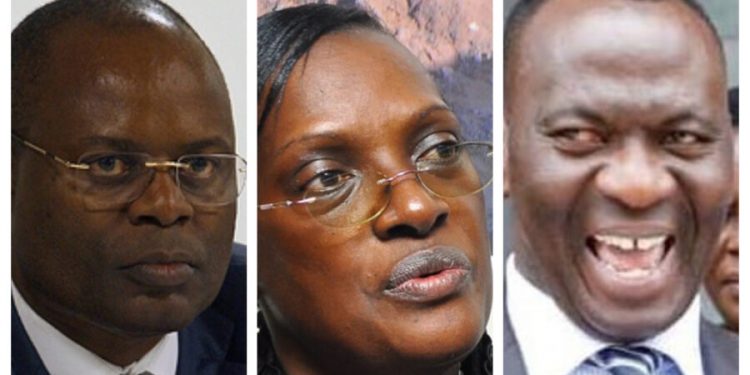 The Director of Public Prosecution has instructed Criminal Investigation Directorate (CID) to arrest and search homes of former Bank of Uganda Deputy Governor louis Kasekende, Former Executive Director in charge of Supervision Justine Bagyende and Benedict Sekabira, the Director Financial Markets Development at Bank of Uganda and others for their role in the concealing and later seizing land titles that belonged to closed banks.

In a July 7, 2020 letter to CID, the DPP directs that all the pending progressive reports are completed on time so as to enable prosecution have sufficient evidence.

“Obtain a Court Order to search and seize all relevant documents, computers from offices and or homes of the suspects for and useful pieces of evidence since they have refused to cooperate,” the DPP wrote.

“Obtain and retrieve all documents detailing all transactions between River Acquisition and SIL Investment Limited.  Record statements from the former Deputy Governor of Bank of Uganda one Louis Kasekende and one J. Bagyenda (Mrs). Evidence on record indicates that they were involved in the saga,” the DPP writes.

“The Auditor General should be asked to carry out a specific forensic audit to establish whether or not the continued charging of interest on loans when the banks are in liquidation is irregular since the banking business stops at the time of closure. Provide a list of loan portfolios demanded by Bank of Uganda from respective borrowers of the defunct banks in its capacity as the liquidator before Nile River Acquisition Limited took over and retrieve certified copies of certificates of title complained of as of from Commissioner Land Registration, Ministry of Lands, Housing and Urban Development. This is aimed at establishing the current position of the titles,” the letter further reads.

The DPP’s inquiry will focus on the relationship between the two disgraced Central Bank officials and three dubious companies that were charged with the responsibility of disposing of lucrative land titles and properties belonging to seven commercial bank that were irregularly closed.

In a letter to the CID Director, Odit Andrew, a senior prosecutor from the DPP, requested that operatives record statements from the former Deputy Governor Louis Kasekende and Justine Bagyenda.

“You are therefore, directed to ensure that you prepare a charge sheet ready for court in respect to the offence of cancelling a title deed C/S278 of the Penal Code Act. There ought to be a count for each of the titled deeds we currently have and from the complaint so far. The probable suspects Kakembo Katende and all his associates/partners trading as Ms Kirkland Associates. Nanyonga Evelyn and all her co-Directors in SIL Investment Limited and the coordinators of the defunct in liquidation one Ben Sekabira together with Polly K. Ndyarugahi his co-coordinator. Have all the suspects arrested and arraigned in Court.

The DPP told CID that “evidence indicates that they were involved in this saga [of illegally acquiring properties from banks that had been irregularly closed.”

DPP also directed CID to obtain a Bank statement print out for A/C No.600077494 at Barclays Bank belonging to SIL Investments. We need to establish its business partnerships from this statement.

The DPP also wants CID to record a statement from the proprietor of SIL Investments Ltd in respect to its association with Octavian Advisors, Kirkland Associates and other Bank of Uganda employees.

The directive from the DPP for a fresh inquiry is largely informed by findings by Parliament’s Committee on Commissions, Statutory Authorities and State Enterprises (Cosase) which faulted the former Deputy Governor Kasekende, Mrs Bagyenda and Sekabira for illegally enriching themselves by selling properties belonging to closed banks.