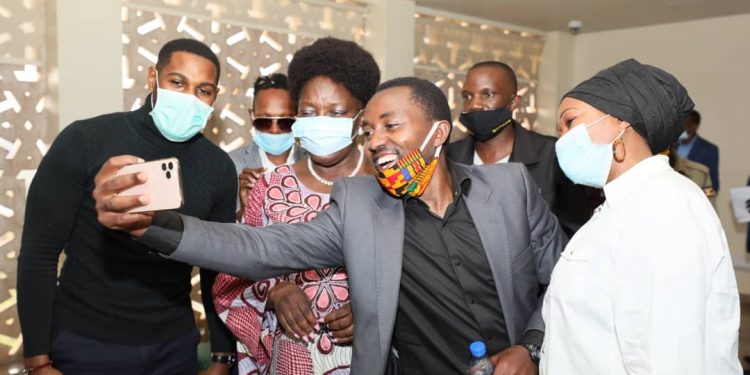 Following the recent proposed implementation of the stage Play and Public Entertainment Rules  S.1. N0 80 and the Uganda Communications (Film, Documentary and commercial still photography S .1.79 of 2019 Uganda’s entertainment industry has been in an uproar.

We had a chat with artists, entertainers and industrial stake holders on what they think about the now revoked rules and what government can do to make the entertainment industry better

The sector had been neglected for a long time so we are coming together as the national cultural forum to see how we can sit down with government and tell them how business operates because most of the people in the government agencies and intuitions do not exactly know what we do so what we are doing here is to align them.

we have a lot of potential as the artists and  the entertainment industry for people to make billions of shillings as business people and government can make a lot of money in taxing so that’s where we are.

However now is not the time for government to implement laws controlling the industry? Government should put into effect the copyright law, create more community centres so that talents can be natured, but also create a favourable  climate for the development of the industry and once all is done then we can think of laws to govern the Entertainment sector. Otherwise you can’t legislate what you haven’t contributed to its development.

Government should ensure that the copyright law is in full effect. This will solve a lot financially for all artists by protecting their works and gaining from their artistic works long after they have retired.

The government should enforce the corporate law because it protects the creative industry and the arts. Like an artiste in Uganda will need ten hits to be able to buy a car  or build a house because the music isn’t protected but in Nigerian one can release one hit song and have ten houses and a couple of range rovers because they have structures in place to protect the artist. People can’t duplicate your song because they can be sued.

There are people who are speaking for us and making decisions on our behalf that we do not know. I have been called for meetings and you find someone you do not know making decisions for the music industry, however it is easy to conclude that the move by UCC is political. If it wasn’t for the recent developments in the political arena, I would think otherwise but now it is almost clear that suppression of the creative arts is politically motivated

When you impose these regulations, you are taking the arts industry back to at least 5 years. It is hurting for you to fight for yourself and a government body comes up and restricts your work when they did not help you develop.

The people making decisions and coming up with all these crazy ideologies of how the industry should work are not part of the industry. So chances are that they are bound to misread and misinterpret how everything works. Which will result  into the most negative reaction from the industry’s patrons. This been said, Gov’t should consult 1st, then 2ndly involve the patrons of the industry and have a committee representing in behalf of the industry.