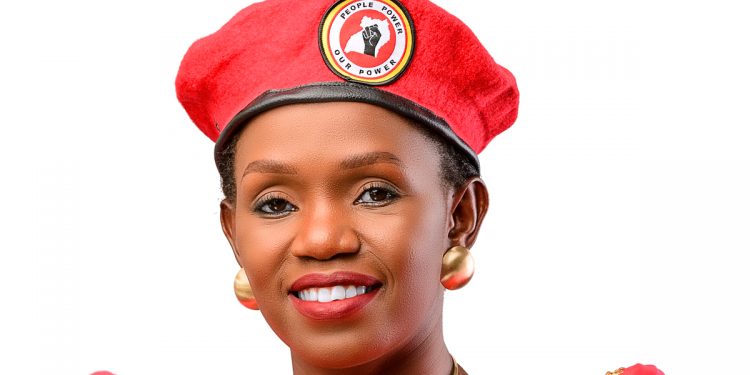 The run-up to the 2021 elections keeps unveiling several contestants seeking to occupy different electoral positions. Recently, the political movement, People Power led by Hon. Robert Kyagulanyi Ssentamu, mutated into a political party, National Unity Platform (NUP) leaving many that were hoping to ride on its wave, in confusion and disarray.

Among the few that were neither confused nor in disarray is Agnes Namaganda who is confident she will carry the NUP flag for Kampala Woman MP position and confidently win it with a landslide.

“The party issued an Expression of Interest for all political positions and received several applications from aspirants. On this form, I allayed that my only political affiliation is People Power. I am not entangled in any other political relationship. I solely belong to NUP and I have never been a member of any other party,” she explains.

From these EOIs, NUP will be choosing flag bearers for the different positions. The Electoral Commission at NUP has explained the criteria that will be used to choose a party flag bearer and Agnes Namaganda is confident that her strong presence on ground will see her go through.

Namaganda explained that through her organization, Zoe Education Initiatives, where she is the Executive Director, she spent her free time last year, engaging in several campaigns around the city.

“Currently, I am involved in the No Teenage Pregnancy in Kampala campaign to address the high rates of teenage pregnancies ever since schools were closed,” she explaind. “I have been greatly inspired by Hon. Kyagulanyi, to come out and change the face of leadership in this country and at the moment, changing the face of leadership is equivalent to changing government because this government has failed to learn from its mistakes.”

“In fact, we can as well say that these are no longer mistakes. Whatever they are doing is deliberate and the lockdown wind, blew their dresses up in the air exposing their vile nakedness in this regard! This government places no value on the people that welcomed them into power as bandits, people who chose, for the sake of peace, to forget all the atrocities they committed in the process. It is now clear that the means they used to take power has dictated their end. They are lawless and unfeeling towards the suffering of the ordinary citizen.”

About choosing to represent Kampala in particular, she explains that this district is a unique constituency given the vibrant political disposition of its constituents. However, Kampala’s voters have been receiving a raw deal. Kampala has not been receiving the excellent representation they deserve because of the quality of legislators they send to Parliament; that is why I am standing, she firmly adds.

“How on earth could a legislator representing Kampala fail to vote on the Presidential Age Limit Bill?” Namaganda emphatically asks, referring to Naggayi Nabilah’s (current Kampala Woman MP’s) failure to cast her vote on this matter.  If she was indeed sick and hospitalized, she should have given us pictures and updates plus apologies regarding her failure way before the D-day. Kampala represents the highest resistance to the ruling party and we expect our representatives to clearly represent our abhorrence for the vices of this government because we come out to support them in droves when they do. We are fearless and ready to cause the change that the rest of the country is waiting upon, she explains.

“Secondly, how can Kampala, with all the revenue collected from this city, have a pothole? Our heavy tax burden plus the baggage of the high costs of living that we carry, can at least be lessened through such simple gestures like pothole-free roads! Instead, money collected from here, is shared with mushrooming districts that are created out of bad faith; districts that cannot sustain themselves but have to rely on Kampala!”

When we ask Namaganda the question of her lack of visibility so far and why she is coming out now, she explains that she’s been working in government under Makerere University School of Public Health where she’s been heading the Communications and PR efforts of this prestigious entity.

“It is hard to come out very openly and brazenly when working under government. However, I have been in touch with the grassroot voters propagating my aspirations through my work. I have been quietly sharing this work on my social media pages. Now that I am fully out, it is easier for me to entertain extensive media coverage for my community interactions without worrying about conflicts of interest with my job,” she explains.

Namaganda holds a Bachelors of Science degree in Education majoring in Physics and Mathematics. Right out of university, she taught at Makerere High School-Migadde, Kololo High School, and Cornerstone Leadership Academy in Matugga. She then left the teaching profession and joined the Daily Monitor as a Features’ Writer for five years. She also worked briefly with Communication for Development Foundation Uganda (CDFU) thereafter. Before joining Makerere University, she was the Team Leader of Communications and Public Relations at Buganda Land Board, the outfit that handles all transactions on Kabaka’s land.