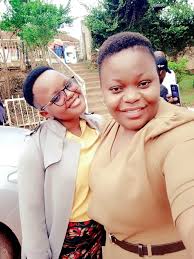 Catherine Kusasira’s daughter Finerah shocked her mother when she confessed to her face that she doesn’t enjoy her music like the way she enjoys Rema and Spice Diana’s music.

During the interview Finerah revealed that she loves and respects her mother so much but she is not a fun of her music.

Finerah who has just released her first song dubbed ‘maama’ says song birds Rema and Spice Diana inspired her to join the music industry. She also said that her mom has inspired her in a number of things apart from music.

“To be honest I am not your fan in music, I love Rema and Spice Diana,” Finerah told her mother Kusasira.

She further went ahead and explained why she doesn’t love her mother’s music.

“My mother Kusasira’s music is for old people that is why I don’t enjoy her music. Spice Diana and Rema they sing the music which fits in our age,” Finerah added.

However according to singer Kusasira she has no problem with her daughter’s decision of supporting other musicians.

“I can’t hate my kid because she doesn’t love my music because even me myself there people I support and other people don’t support them and we still talk,” said Kusasira.