Museveni vows to end vote-rigging, “It has been my mission since 1961” 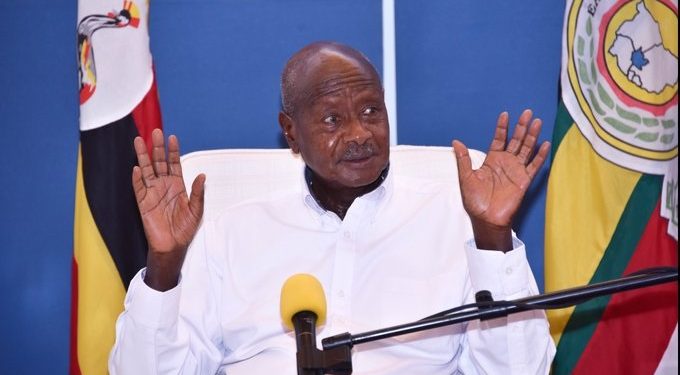 President Yoweri Museveni has vowed to use modern technology to wipe out votes rigging in Uganda. Museveni says vote-rigging is criminal act that nullifies the sovereignty of the People.

“We, who are in the NRM, have been fighting this ever-since 1961- that is 59 years of struggle. The mulyabyengeddes (opposition) need to know that struggles, sometimes, take long,” Museveni says.

Museveni says since NRM took over power in 1986, a lot has been put in place to combat the criminal act of rigging.

Counting is now done immediately after voting and the results declared unlike in the past when the ballot boxes had to be exported from Bukhungu on the shores of Lake Kyoga to Jinja before opening and counting. The contestants have their agents at the polling stations to see what was going on and also registers are displayed on the polling station sometime before polling so that the surrounding villagers identify the non- residents, the dead, those who migrated, the underage, etc.

He concedes that despite all the above, rigging has remained a challenge due to corruption and lack of vigilance by many of the citizens.

“Citizens have no time to go and check on those registers. This allows the crooks to manipulate the lists. Then there is the problem of violence, threats, intimidation, and bribes which the Police and GISOs should stop,” he says.

Nevertheless, Museveni says a big step is going to be made to end vote rigging.

“The only way to close this gap that did not depend on the vigilance of the People was the digital verification of the voters using their biometric-data (fingerprints etc.) so that voter registers only once and if he or she tries to register a second time, the central memory of the system will detect it and block it.

The corrupt team that was in the Electoral Commission refused to procure this system. It is, however, being procured now. This will end this sad story of the anti-democratic forces at least as far as the problem of multiple voting and multiple registrations are concerned,” Museveni reveals.

The issue of bribery, threats and attacks, Museveni says Police and the public should capture evidence and prosecute criminals.

Museveni vows to end vote-rigging, “It has been my mission since 1961”