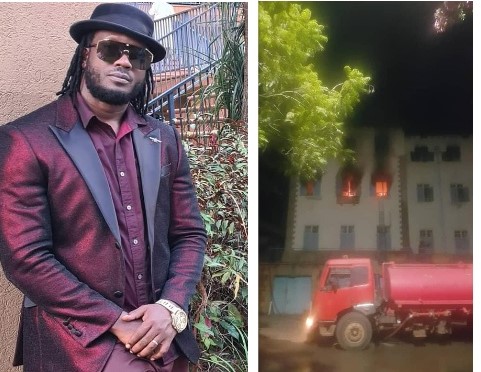 Following the fire outbreak at the Makerere University Ivory Tower and a lot of speculations  still surrounding the cause of the fire, the silent majority advocate Bebe Cool has commented on the calamity that befell the country’s oldest University.

“First Makerere fire would have  kind of supported the  intended project though it was obvious to people with common sense based on the materials used to build the block, it’s height,spread of the fire, police response…,”stated Bebe Cool.

Bebe Cool posed a question which he later answered wondering if there’s a kitchen at the top floor to cause the fire or whether an electrical failure malfunction caused the fire.

“now a second floor below catches fire after the visit of the first lady, well the plot is lost now and it’s unfortunate obvious foul play,” Bebe Cool added on.

The Museveni fanatic also stated that a lot of politics is involved and it won’t deter them as the NRM supporters .

“But anyway burning buildings wouldn’t make supporters of NRM change their minds incase that was the point. Lots of politics in play now and we stand to watch,”  said Bebe Cool.