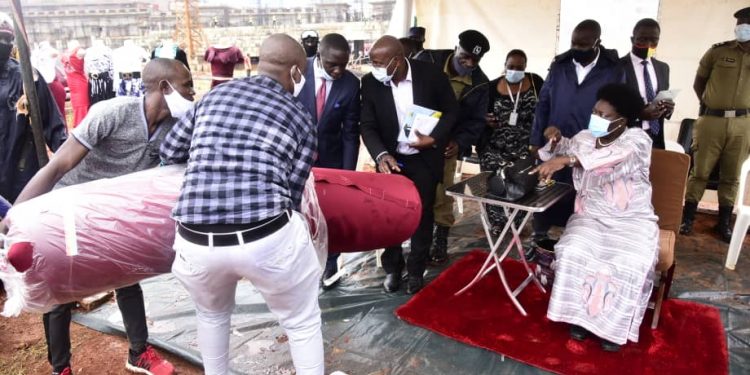 Speaker of Parliament, Rebecca Kadaga, has directed the Ministry of Finance, Planning and Economic Development to review taxes on imported textile, following an uproar from traders who said the new tax regime is prohibitive.

In a meeting with the United Textile Group and Manufacturers’ Association at Nakivubo, downtown Kampala, Kadaga said it is unacceptable for such taxes to be levied on traders struggling to recover from the adverse effects of the COVID-19 pandemic.

“What surprised me is that they moved from metres to Kilogramme; the people who bring such policies come from Ministry of Finance; these traders are not a threat to any industry here because there is no factory that manufactures jeans, or the things that there traders make,” said Kadaga.

It is wrong, she said, to burden people with such taxes when they are coming from severe lockdown.

“People have just come from the Covid-19 lockdown and they have no rent, no salaries, why do you strangle them?” she asked.

In amendments introduced to the Excise Duty (Amendment) Act, 2020, government proposed to up the taxes on textiles coming into the country to 25 per cent or at US$5 per kilogramme, whichever is higher.

The move was intended to protect the local textile industry, but it was not long before traders rejected the measure, saying they import textile that is not manufactured locally and that they add value on it for onward export to other countries.

Government then gave traders a grace period of three months, which would make the taxes effective on October 1 2020.

Fahad Ssembajjwe, a member of the Association, criticised the move.

“The Ugandan companies produce only cotton materials; when we give them orders, they instead buy them from China,” he said.

Ssembajjwe said the new tax measures mean a container that originally paid Shs100 million in taxes is now condemned to pay Shs 800 million, a move he said can only be intended to drive them out of business.

Brigdet Mwagale the secretary to the group also added her voice by asking for a grace period of about five years from the tax body to help the traders get acquainted with these amendments.

Mr Kisitu Kigozi, the Assistant Commissioner for Trade at the Uganda Revenue Authority said the taxman is only acting on laws as relayed through their line ministry, Finance.

Legislator Muhammad Nsereko said the taxes are insensitive to the plight of the traders.

“This tax should be stopped immediately; this is being unfair to the downtrodden and the tax offends the principles of taxation by being uncertain; how do you tax someone from Shs100 million to Shs800 million post lockdown,” he said.