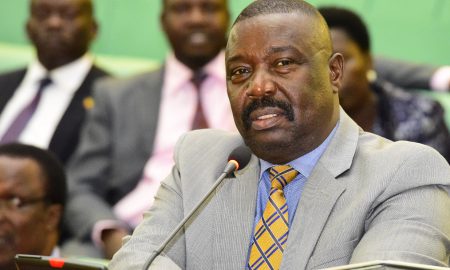 State Minister for Labour, Mwesigwa Rukutana is described by many as arrogant, controversial and violate due to the various incidents he has been involved in. The most memorable is when the former deputy Attorney General blasted Lady Justice Catherine Bamugemereire, the chairperson of Land Inquiry commission.

A few weeks ago the minister was trapped in election violence during the Rushenyi County NRM primaries. The minister involved himself in a violate exchange with supporters of his rival Naome Kabasharira who had at that time defeated him in the party primaries.

He was arrested together with his four bodyguards until last week when he was granted bail by the Ntungamo Magistrate’s Court.

Speaking during an interview on NBS TV yesterday the minister described himself as one of the coolest headed individuals in Uganda.

“I am very cool-headed when not extremely provoked,” Rukutana said.

On the elections violate incident, Rukutana said he was extremely provoked by the rowdy supporters of his rival who attacked his son.

“A priest who was moving with my son called and informed me how my son was in danger just outside my home. I rushed to the scene to save my son,” Rukutana explained.

He admitted to trying to get violate but he was however stopped by his bodyguards who grabbed a gun away from him.

“I did not shoot at anyone,” he said.

Rukutana was yesterday declared winner of the Rushenyi Constituency in NRM Primaries after a recount.

“I am happy but not excited because I knew someone was just trying to rob my win” he said. Rukutuna beat Naome Kabasharira with only 20 votes.